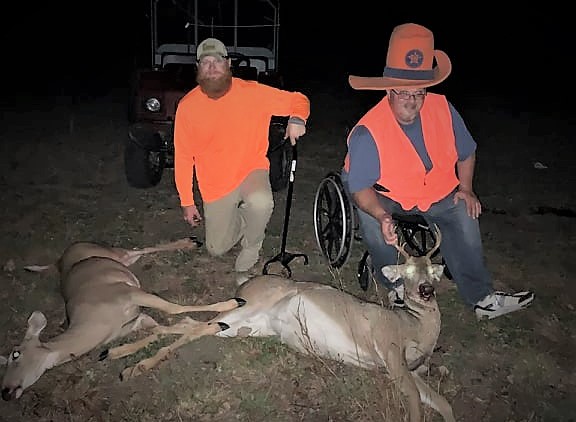 It was a sunny afternoon with the temperature in the low 70’s when the veterans met up with their guides at Wazee Jackson County Park located east of Black River Falls, WI. Doug, a USMC vet, said, “My guide Darrell wished it was colder for hunting, but, being a southern boy in the north, I was pretty thankful.”
Soon afterward, the veterans and guides stealthily entered the deer blinds donated by the Jackson County Wildlife Fund. Tony, an Army vet, added, “My guide Chris and I sat peacefully in the blind while taking in the beauty that surrounded us. It was so peaceful and serene.”

Doug and Darrell saw a few does and several young bucks moving around in the landscape. As shooting light began to wane, Darrell looked at Doug and said, “If we are going to get a shot, it’s going to be in the next 15 minutes.”

Then shortly afterward, on top of a hill at the edge of their range, eight-pointer stepped out into view. Doug said, “We waited patiently, and with only minutes left to hunt, he finally presented an opportunity to shoot, and Darrel gave me the go-ahead to take a shot. I knew it was a successful hunt when I heard Darrel’s wolf call in the distance after he found the buck! It was the biggest deer of my life!”

They were all settled in their ground blinds the following afternoon, and it wasn’t long, and Tony and Chris’s ‘turkey orchestra’ returned. But now, along with gobbling and loud rattling bugle calls, Tony said, “We could hear an elk going through the woods while bugling.” Next, a spike and doe came in, and then another doe and 6-pointer joined them, and then all of a sudden, 7-8 does join the group. “So we waited and waited and waited for what seemed like forever for a bigger buck.

It was getting late, so I decided I would take this one as soon as I got a clear shot. Finally, the two does in front of him moved, and there was an opening, and I made a perfect shot. It was amazing, I have not shot a deer for over 15 years, and the whole experience was terrific!”

Doug said, “We had a few does moving about on the tree line out of range late afternoon, but didn’t see hardly any movement compared to the first day. Then a few doe came into my field of vision towards the end of the night. Then a doe came into range, and I had a clear shot and took it; she went about 40 yards and dropped.”

Joel, a navy veteran, said, “It was around 3 pm on Friday when my guide Darrell and I rode the UTV to the blind set up in an open area with a large hill as a backdrop and got set up. We soon had turkeys come by, and a couple of cranes landed nearby to entertain us, and we waited. Finally, with about 20 minutes left in the hunt, Darrel let me know that deer were coming into the field. Soon I had a young doe in front of me, and Darrel said the buck was approaching with a larger doe, so I got ready to shoot. The doe came into the field about 70 yards away, looked at the blind, and started her alert snorting. Darrell said the buck stopped and turned back, and I better take the doe if I wanted to. I had her broadside and looking at me, so I clicked off the safety, pulled the trigger, and fired. The doe hunched and turned and ran up the 100-foot hill and stopped and dropped back down the hill. I was excited to get her, and that buck was just not in the cards.”

Early the following morning, the vets went pheasants hunting in Warrens, WI. Darrell said, “It was a great hunt,

and the lady who guided with her pointer was fantastic. NASA provided volunteers, birds, and use of their Kubota and the morning meal; they did a tremendous job. During the afternoon hunt, Woods and Meadows graciously donated the use of their golf carts and afternoon meal.”

A hearty shout out to the Jackson County Park & Wildlife, North American Squirrel Association (NASA), Woods and Meadows, and USSA Sponsors for their continued support in making hunts possible for our American Heroes. Congratulations to the veterans on their successful hunts and the nutritious and delicious venison and pheasant they will enjoy with their families! God bless!