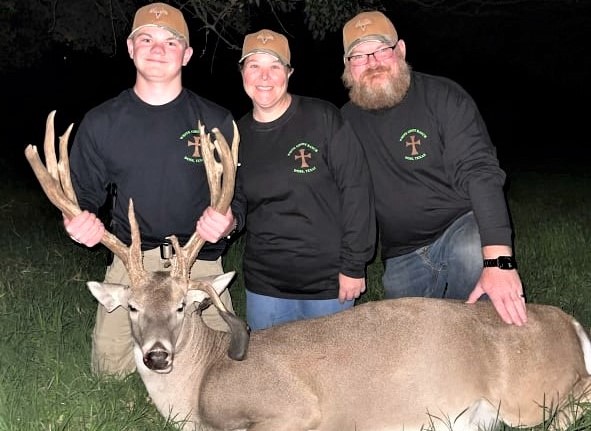 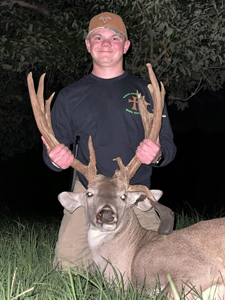 Kevin served in the Airforce for eleven years and deployed to Iraq and Afghanistan. “My son Matthew wanted to follow in my footsteps, but with his medical issues, it’s made it difficult.”

Matthew, 15, hunted with his dad but never got the opportunity to get a buck. So, he was elated when his parents told him he was going on a once-in-a-lifetime hunt.

It was midafternoon when they arrived at White Ghost Ranch in Doss, TX. The weather was sunny, with temperatures in the low 80’s. After getting settled in, they headed out to the gun range, and Matthew’s shot was right on the bullseye. His father said, “I raised my son to shoot, and he is an excellent marksman!”

With their mentors, Brent and Bob, Matthew and his parents drove out to the hunting blind the following morning. They only sited a few deer as the morning wound on, so they decided to head back to the ranch for lunch.

Early in the afternoon, they all headed back out and settled in the blind again and waited eagerly for a buck to come out. Then, as the shadows began to lengthen, deer wandered out of the mesquite while feeding. At around quarter to seven, a giant buck came out into their field of view. Matthew placed the .243 Browning rifle on the ledge, waited until the deer was in range, gently pulled the trigger, and his Monster Buck 184 B&C 10-point mainframe with one 13-inch drop tine was down for good on the Texas landscape.

They waited for a while, and then the guys went to trail the buck in the dark. Matthew said, “there were only a couple of subtle signs, and then low and beheld there he was. I was shocked and overwhelmed with excitement at the sight of him lying in the moonlight!

“It wasn’t just about the hunt, but also moving to watch the values we instill in our son present in the interaction with Mr. Brent and Mr. Bob,” said Kevin.

Heartfelt thanks to Brent & Pam Geistweidt and White Ghost Ranch for graciously hosting his dream hunt. Special thanks to Brittni Bones and Twisted Hollow Taxidermy for donating the mount and Bob Samson and Hope Kids for their part in helping make his dream come true!

Congratulations to Matthew on his trophy buck and the fantastic memories shared with his parents and newfound friends. Yes, Christmas is the spirit of giving at White Ghost Ranch, as their USSA hunters experience first-hand the joy of God’s great outdoors! God bless!

If you are interested in getting involved or know of a deserving child or veteran, don’t hesitate to contact United Special Sportsman Alliance.