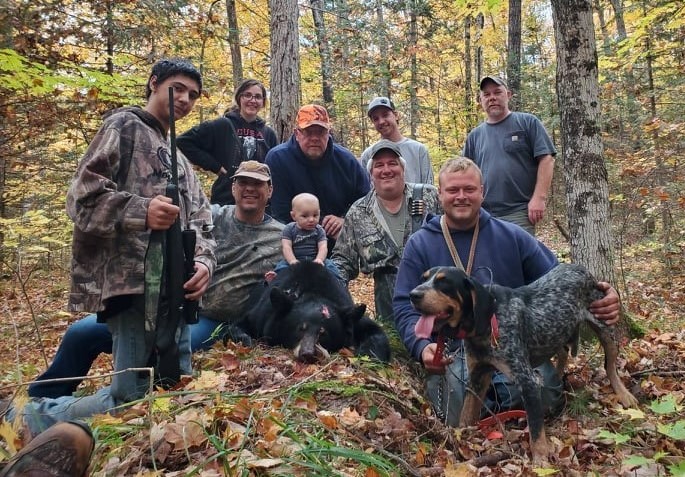 After passing his hunter education course last year, Silas’s parents purchased him a 7mm Remington rifle. He had been hunting with his dad but never had the experience of bagging an animal. So when he heard he was going on a bear hunt in Wisconsin, he was filled with joy and anticipation.

Josh said, “On the first weekend we hunted, my son did not get one, but he enjoyed watching how the dogs worked. On the second hunt, the dogs were on a bear and were tracking it well, and he liked watching the run on the GPS. However, the bear they were following kept circling and coming back to the same area, and finally, the bear jumped off its escape trail, and the dogs lost it. Curt Rollman and his group worked hard, and it was very exciting!”

During the week, the group did not see a bear on their cameras and recommended they hunt in a different location. So, the third weekend they traveled farther into the northeastern section of Zone B and hooked up with Tom and Tucker Munsch and their group.

They had a bait hit the following morning, but the track was old, and the dogs couldn’t line it out. Then, finally, a bear hit another bait, so the group started the dogs on that one, and it took about two hours, and the bear was up the tree. Hunting was challenging due to early morning rain. It was about a half-mile walk to where the bear was treed. Upon arrival at the tree, they picked out the best spot, Silas steadied his 7mm rifle, squeezed the trigger, one well-placed shot, and the bear came down.

“My son was happy he got the bear, and a variety of thoughts and emotions ran through his head as he took in the amazing hunt he just experienced! I was very proud of my son; he stuck with it and got the bear. The guys were great with him, very understanding, and patient.”

A special thank you to Bryan Hauser for donating his license. Shout out to Tom and Tucker Munsch, Emma and baby Charlie, Zack, Mike, and Brent Kadubek for making a young man’s dream come true. Congratulations to Silas on his trophy bear and the unforgettable memories and camaraderie shared with his dad and hunting buddies! God bless!