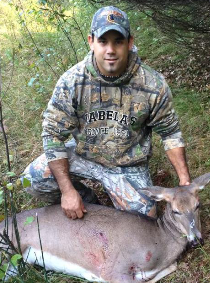 My name is Eric Knutson. I was born on January 14, 1987 in Fond Du Lac, Wisconsin. In December of 2011 I moved to the Waupaca area and shortly after married my wonderful wife, Kendra. My love for hunting and fishing began when I was very young, with my grandfather taking me fishing every chance he got. Then when I was old enough to go hunting, it became a tradition for my uncle, my cousin, my dad and myself. We would go deer hunting together every year. In 2012 I reconnected with a longtime friend, Chris Dekker, and soon began hunting together every chance we had. Shortly after we thought it would be fun to start trying to help introduce the joys of the outdoors to others that are a little less fortunate than ourselves.

At the time I was working with a gentleman that I had heard his sister was part of an organization that guided hunting and fishing trips for just that. Come to find out his sister was Brigid O’Donoghue, the founder of USSA. Shortly after getting in contact with Brigid, we went on our first USSA hunt. The experience of that hunt was second to none. Although we did not harvest a deer on that hunt, it was still one of the best hunts I’ve ever been on and I knew from that point on this was something I had to continue to do.