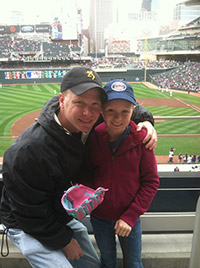 Bryan grew up in northern Wisconsin (Bayfield and Ashland) and graduated from Ashland High in 1989 and University of Wisconsin – Eau Claire in 1993. After college he moved to the Milwaukee area where he worked as a headhunter for the IT industry for seven years.

Bryan was involved in the Big Brothers/Big Sisters program while in college at UW-Eau Claire and also for the seven years he lived in the Milwaukee area after college. He still has a very close bond with his little brother (who is not 30 years old).

Bryan met his wife in a round-about way while fishing in Canada in 1998 and decided to quit his job, sell his house and move to the Twin Cities area in 2000 to begin a new chapter in his life. He and Jan married in 2002 and have three wonderful kids. They built a house in Scandia, MN in 2006 where they currently reside. 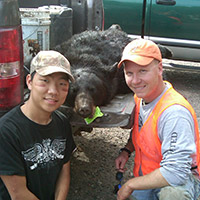 After working in sales for twelve years, he and his business partner decided to start up their own company in 2005. Relay Networks buys and sells IT, telecom and wireless equipment and has customers in over 35 countries at the moment. They currently employ 11 people and recently moved to a new facility in Lino Lakes.

Bryan got involved with USSA in 2010 through Dean O’Brien, the Minnesota State Representative. He has been involved with the annual youth event for USSA in Forest Lake, MN and has chaperoned numerous USSA kids on bear and turkey hunts. He thoroughly enjoys helping kids (fortunate and less fortunate alike) and has gotten to know quite a few of the USSA families on a personal level. He loves how the kids and families are able to get out and fish or hunt for a weekend and leave their daily problems behind, at least for a few days. He looks forward to helping more kids and Veterans fulfill their outdoor dreams.

Bryan enjoys hunting, fishing, golfing, trapping pesky gophers and most of all hanging out with his family.