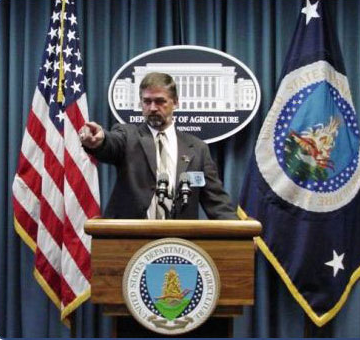 Joel has served USSA for many years as a member, board member, vice president, president and currently chairman of the board. He has worked with government officials to change state rules that kept some of our special children out of hunting activities due to their age.

Joel grew up on a farm in Northern Illinois and was All-State in two sports while in high school and also competed as a scholarship athlete at the Division 1 level. He graduated with a degree in education and went on to a successful career as a teacher and coach. His 1981 Fennimore WI Cross Country Team won their 5th consecutive State Championship (a state record) and set an all time scoring record by skunking the entire sectional competition and scoring a mere 23 points at State.

He was honored with Commendations for Excellence from the Wisconsin State Senate and the White House. He later returned to college for a Masters Degree in Education Administration and retired 19 years later as a school principal.

Eleven years ago, Joel, his wife Cheri, son Jesse and daughter Brianna started raising Rocky Mountain Elk on their farm in Monticello, WI. Shortly after they started this venture, Chronic Wasting Disease appeared in Wisconsin. At a time when some government agencies were causing a panic with misinformation, Joel had researched the disease extensively and was able to public point out misconceptions at symposiums and legislative meetings.

His knowledge and skills caught the attention of the Wisconsin Commercial Deer and Elk Farmers Association who voted him on their Board of Directors at the first meeting he attended. He went on to lead them as President of the state organization and helped rebuild them.

At the national level, US Senator Feingold requested that Joel lead the first Summit Meeting in Washington DC for all the federal agencies.

The North American Elk Breeders Association also acknowledged his achievement and after being elected to their Board of Directors, he was voted in as President the same day. He is the only Wisconsin member to ever hold that title. 2006 marked the organization of the Non-Traditional Farmers and Ranchers Coalition. This umbrella group for the deer, elk and exotic breeders was formed to protect the game farm industry from the unfair treatment by animal rights groups and government agencies. Joel was elected as its first President and has held that position ever since.

In 2005, he was asked to speak at the 2nd International CWD Symposium. In 2009, USDA/Aphis requested him to also speak at the 3rd International CWD Symposium held in Utah. In the same year, US Secretary of Agriculture, Tom Vilsack, requested that Joel be present at a special closed door meeting in Washington as one of the top 25 leaders in livestock producers in the nation. At that meeting, Joel gave an oral and written presentation on the National Animal ID System. Joel has made regular trips to DC since 2003 and shares USSA stories with legislators about children from their own districts.

He has been featured speaker at the state and national association from Texas to Alaska and always finds a way to include USSA in his presentations. In 2009, Joel formed the National Institute for Human Slaughter. This organization conducts 3rd party evaluations of packing plants to guarantee that animals are not abused or mistreated.