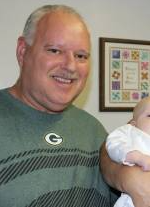 Hello, my name is Kevin Cook, my wife Peggy and I have six children, all boys, and all of them have some disability or special need. Peggy works with disabled or challenged adults, and I work for the State of Wisconsin in the Department of Corrections or Department of Health Services as a Correctional Officer. I have been a Sergeant and Captain for 26 years, having worked with many individuals that are incarcerated I learned that many of them either had some disability or disorder, and most came from broken homes, or had been through the foster care system gave me a feeling that I wanted to help other children have opportunities for a better life, so Peggy and I became foster parents.

We got involved with USSA back in 2000 when Peggy was at Wal-Mart with our adopted son John and met Brigid O’Donoghue when Brigid approached her curious about her involvement with persons with disabilities, two perfect strangers who met and talked for about 20 minutes. By the end of the conversation Peggy and Brigid had discovered they were both women with huge hearts and a passion for taking care of people who are less fortunate or who have some disability. Brigid told Peggy about her charity that she had founded to grant wishes for outdoor activities such as fishing and hunting trips for children with disabilities or life-threatening illnesses. Peggy told Brigid in addition to working with disabled people too, we also were foster parents and had recently adopted one of our foster children that had special needs. The conversation ended with Brigid inviting us to bring our son to a pheasant hunting event that USSA was sponsoring.

Brigid contacted us with the details of the event and Peggy took our son John to the event. He was successful in being able to shoot several birds, during this event and it became clearly evident to Peggy that this organization was one of a kind and everyone was so family oriented and the children not treated as being different or picked on or bullied. To see the smiles on these children’s faces and the appreciation they had for getting the opportunity warmed Peggy’s heart, she knew it was an organization founded on love and faith by a woman who has blessed herself by overcoming life-threatening illnesses and wanted to give something back to others. Peggy and I discussed the charity and the opportunity that it offered to our son John, and we decided that this was something we wanted to get more involved.

Over time we both became more involved with the charity in any way possible little things at first just by helping find more children to get involved with the opportunities, then by volunteering our time at the Summerfest event. Each year we got more and more involved now some of our children also volunteer their time. We are proud to have been invited into the USSA family, and the charity kept growing and growing. Through the years our level of involvement grew, and now both of us devote much of our time to helping with the charity in any way we can.