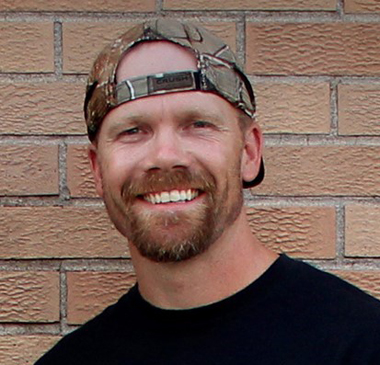 My name is Scott Roen, and I live in Salem, Iowa. I’ve been happily married to my wife (Laura) for 18 years now, and God has blessed us with four children [son-Bailey (17), and daughters-Kylee (15), Scotlyn (12), and Josslyn (11)]. I graduated from Aurora University (Aurora, IL) in 2002 with a degree in elementary education, though I never pursued that career. Instead, I now drive for Ruan Transport.

Sports and the outdoors have always played a big part in my life. I played baseball and soccer in college but really enjoyed all sports (if there’s a ball around, I’m always drawn to get involved!). My wife and I met on a softball field when I was asked to play on her coed team as a replacement over 15 years ago. She was playing 2b, and I played SS, and to this day, we are still turning double plays!

Even though I love to play sports and games of all kinds, the outdoors is where I feel my passion truly is. I love being able to take my wife and children out into God’s creation and watch the joy on their faces when they catch a fish or harvest a deer.

I first found out about USSA from my dad (Rusty Cox). He had helped on Illinois dream hunts for several years, and I’m always interested to hear of the hunts he’s been on and the children he’s been able to take out. Usually, after hearing the hunts and the stories of what these children face daily and some of their struggles, I feel compelled to pray for them. Then I would feel a tug on my heart to one day get involved.

Toward the end of 2017, that tug finally prompted me to ask my dad if he knew of an Iowa chapter. That’s when he gave me Brigid’s number. After talking to Brigid for at least an hour, I was convinced God had His hands all over this. Prayers were being answered on both sides, and I knew God had meant for us to cross paths and eventually start what is now called the Iowa Dream Hunt.

Over the last eight years or so, I’ve had the opportunity to coach youth sports programs, and a few years ago, my wife and I felt God calling us to purchase an old bar in our town and turn it into a youth/children’s hangout, which is called inside Korner. And now here we are in 2021, and couldn’t be happier being a part of such a great team (Team USSA).

It’s clear to us that Brigid and the rest of everyone at USSA have one primary focus, and that is to love. Yes, it’s wrapped up in Dream Hunts, fishing trips, Summer Fest, and Winterfest, and other fun activities, but there is a genuine love that doesn’t go unnoticed.

No matter their backgrounds or circumstances, all children need to know they are children of God and loved beyond measure that they were created on purpose for a purpose! They need to know that God doesn’t make mistakes, only masterpieces! And they are His masterpiece! I feel this charity organization is built on Godly principles, thus making it a no-brainer to want to be a part of it.

“Have I not told you? Be strong and courageous and have strength of heart! For the Lord your God is with you anywhere you go.” Joshua 1:9