Caffrey said, “We got to the camp on Friday evening, got right into the camper, went to sleep, then got up at 5 in the morning, and got all our hunting stuff ready to go. We went to Brent’s house, got into his truck, and drove out to where he had all his baits. We waited in his truck while his friends and kids checked the baits. He told us how the GPS tracking collars on his dogs worked. We could see where the dogs were on his tablet and watched to see if they had a bear up the tree or not. It wasn’t long, and a bear hit one of the baits, and the dogs tracked it pretty close to where we were parked. The dogs found the scent, then the bear, and chased it up the tree. One of the dogs sounded like it was going “arf…arf…arf,” and the other dogs barked normally. I was really excited because I knew they would get one!

We all followed behind Brent to get to the bear. We had to go down a hill with a bunch of baby trees and dead logs. And the hill was pretty steep, so it was hard to get down. We had to hold on to the trees, put our feet down, hold on to the next tree, and then go down more and keep going. I slipped a little bit but did not fall. When we got to the bottom of the hill, the tree was right there, and we didn’t have to walk far.

I was a little nervous but mainly excited because I wasn’t sure what would happen after shooting the crossbow. Brent set the tripod up and aimed it towards the bear, and I squeezed the trigger, and the shot was right on. I was excited, but I just waited there until the bear fell out of the tree.
The best part was getting the bear because that was the whole point of my hunt. I was also happy my family could be with me. Brent and Nick were nice too, helping me get everything ready for 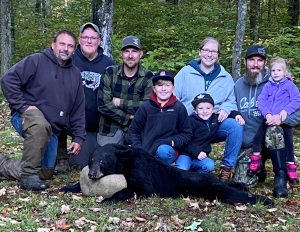 Brent said, “The most impacting part of the hunt was having someone experience a hound hunt/ bear hunt for the first time. Also, having his entire family able to attend and make lifelong memories together!”

“I’m glad I could be a part of Caffrey’s hunt, and my tag went to a great cause. The smile on his face is priceless,” Scott said.

We are grateful to Scott Ketter for donating his license and Brent Evitch, Nick Roiger, and the Critter Gitter Hound Hunter Crew for helping make a young man’s first hunt a great success. Congratulations to Caffrey on his trophy bear and the wonderful memories and camaraderie shared with his family and hunting buddies! God bless!