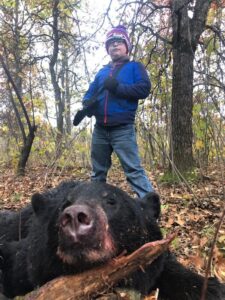 Cameron and his dad Virgil met up with their guide, Tommy, early in the morning. They checked two baits, and both were hit and had fresh bear tracks. The start dog, ‘Copper,’ tracked a bear eight miles straight south, running at 11.5 MPH. The other four dogs cut in and helped run the bear. There were big paw prints on the road, and the anticipation rose quickly among the group. 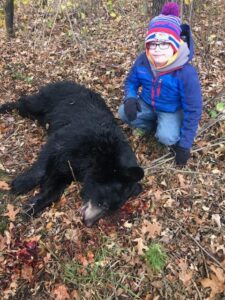 Tommy said, “After the bear treed, we walked 467 yards on rough terrain. Cameron’s strength and energy were amazing; he’s quite a trooper!”

When they got near the tree, Tommy handed the Browning 25 Super Short Mag bolt action rifle to Cameron. Looking through the scope, he put the crosshairs on the bear, took a deep breath, gently pulled the trigger, and the bear dropped!

Virgil said, “My son’s big smile and big eyes said it all!” 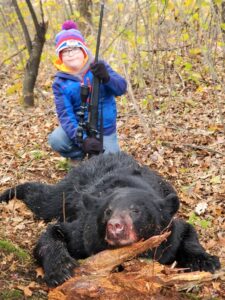 Many thanks to Joseph Frane for donating his bear license and Tommy Thompson, Jay Link, and the FFCS Bear Hunter for giving the young man and his dad an unforgettable hunt. Congratulations to Cameron on his trophy bear! God bless!