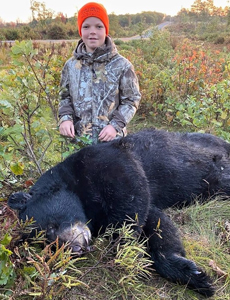 Bebo was excited to learn he would finally be going on his bear hunt. His mother had contacted USSA several years prior, but the young man’s health had put a damper on it. Yet, he never gave up hope his dream would come true.

It was half-past five on a Thursday morning when Bebo, his dad, and younger brother Leland got into Jay Link’s truck. They drove around looking for tracks where a bear had crossed the road earlier. Then when they found one, the dogs winded it and started barking! Jay let the start dog out, and then a little after that, he released the other pack dogs.

Bebo said, “then we all got back into the truck and followed the dogs by sound and GPS. One of the dogs came back for some reason, and Jay put that dog back in the dog box, and we followed the rest of the trailing dogs. The dogs had trackers on them, so we knew where they were.”

They could hear the dogs barking and followed them in on the GPS. Then they stopped the truck because the dogs were getting closer to the trail again, and they were still chasing the bear.
“I got out of the truck with Jay, and he told me the bear is coming up right here and points to where he was, and that is when I saw it, and my heart started pounding even more. Then the bear crossed the road between Jay’s and Shaun’s trucks. I was so excited!”

“When he was going down the trail, I had the gun, and I could see him through the scope, and then Jay whispered to me to shoot, and I took the shot 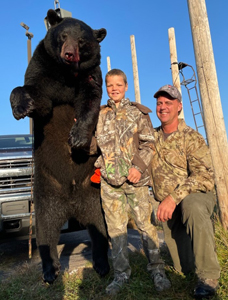 with his 30-06, and the bear dropped in its tracks. I felt excited and shocked. Then, Jay, Shaun, and I started walking up to the bear to make sure it was down. Jay was happy for me. He gave me a high five and hugged me too, and I felt good! The best part of my hunt was getting the bear and hanging out with everyone.

I called my mom, and she said, “It’s awesome, and I’m proud of you!” So, we are getting it mounted, and making a man cave thing and putting it in there.”

Jay expressed, “The life challenges he has been dealing with humbled me, and I am honored to have hunted with him and can call him a friend!! So, hang strong, my little man! I am honored to be part of your first hunt!!”

“Donating my bear license and putting a smile on Bebo’s face for a day, week, or month is more than anybody could ask,” exclaimed Derek. “I can’t wait to share his story with my family and friends at work. I’m so grateful to play a small part in his hunt.”

Shout out to Derek Schilling for donating his bear license, Jay Link and Tommy Thompson, and the FFCS Bear Hunters for their participation. Congratulations to Bebo on his enormous bear and once-in-a-lifetime hunt shared with his family and hunting buddies! God bless!

If you are interested in donating your Wisconsin bear license next year or know of a deserving child or veteran, don’t hesitate to contact United Special Sportsman Alliance.