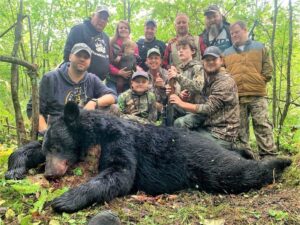 After a thirteen-hour drive, 12-year-old Michael and his family arrived late in the evening at their cabin in Minong, WI. Following his warm welcome, Tommy Thompson gave the young man and his family a rundown of the bear hunt procedure for the following morning. Then, the family, tired yet excited, headed to bed shortly after.

Michael and his dad met up with their guide, Jay Link, early in the morning and headed out to look for fresh bear tracks. Following close behind in another truck were his younger brothers Connor, 8, and Abraham, 7. It didn’t take long, and the group found a good fresh track as the rig dogs winded it and started barking. So Jay let the start dog out, and the FFCS Bear Hunters released the other pack dogs soon after.

Michael said, “Before we knew it, the dogs were on the chase. I could hardly contain my excitement as we followed the dogs through the deep woods of Wisconsin. Then, finally, we reached the tree the bear had climbed.”

They watched the dog tree for a bit upon arrival at the tree, then got Michael in the best shooting spot. They mounted the 30-06 rifle on a tripod, then he looked through the scope, put the crosshairs on the bear, took a deep breath, and gently pulled the trigger.

“The bear fell out of the tree instantly and never moved. I took a 241 lb. black bear down in one shot!! Then, the guys started cheering as if they had shot the bear. I could not have been more proud of myself,” said Michael.

His mother, Melissa, said, “The best part of my son’s hunt was watching how it made Michael feel so empowered. It’s amazing and fulfilling when your child feels true joy like he can do anything. I encourage other parents having children with special needs to allow them the experience to interact with guides and their families, and they will walk away with a sense of accomplishment and belonging too.” 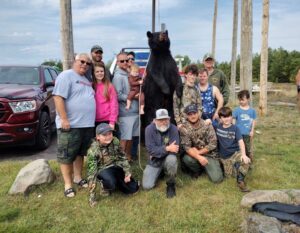 Later that evening, while celebrating the successful hunt, Michael had a surprise visit from Derrik Duchesneau, who was delighted to see his son’s bear tag was given to such a deserving young man.

“Bear hunting was an amazing experience, but the best part was getting to know Jay, Tommy, and all the guides. Truly the best group of men you can hunt with.”
Thanks to Justin Duchesneau for donating his bear license, Jay Link and Tommy Thompson, and the FFCS Bear Hunters for guiding the hunt. Congratulations to Michael on his trophy bear and lifetime of fantastic memories shared with his family and new hunting buddies! Indeed, bear hunting is a team sport! God bless!

If you are interested in getting involved, want to donate your 2023 bear license, or know of a deserving youth or veteran, don’t hesitate to contact us at childswish@gmail.com.