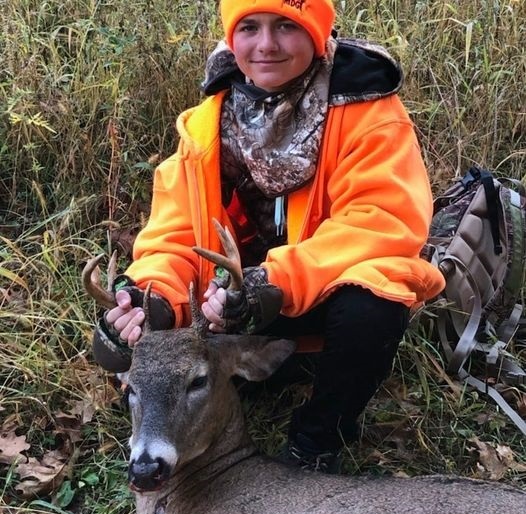 14-year-old Junior, his dad Jason, and their mentor John Spearing entered the tower blind an hour before sunrise. The blind had windows all around it, sitting over a food plot. It wasn’t long after they got settled in they heard a deer below them on the right-side where Junior was seated. They sat still and kept quiet, and after a while, the deer left and went into the clearing.

Jason said, “we waited, and it became daylight, and next thing you know, looking over the clearing, we saw a buck on my left side walking down towards a water trough. We had to move quietly and change spots so Junior could be in a position to take a shot.”

Junior said, “John opened up the window facing the clearing, and I set my rifle up on the window sill. I felt nervous, but I stay focused while watching the phone skope. The deer was behind a tree drinking water, then finished drinking and headed towards the woods. John made a grunting sound, and the deer stopped. I had the deer in the crosshairs and took a shot, and it dropped instantly!”

“The smoke when out the barrel and the deer dropped like a sack of potatoes,” said his dad.

Congratulations to Junior on his 8-point trophy and the fantastic memories shared with his Dad and John. God bless!