Matt, 18, said, “That morning, the dog handlers struck a track and released all the dogs on the top of the mountain. The dogs chased the bear for a long time, and we thought they treed a bear, but we ended up going down the mountain to the bottom and walked in, but there wasn’t a bear in the tree, so we caught the dogs and kept driving. Then we let them out again at another spot, and they struck another bear, and they just ran and ran. So we ended up going back and getting the rest of the dogs to help pressure the bear, and we thought they treed one again. We walked through some brutal thick brush and ended up getting to the tree and nothing there again, so we headed back, and that was it for the day. After covering 2-3 miles on foot of pretty rough country, I was exhausted, but they said that long walking usually doesn’t happen, so I was like, all right, I will get back at it in the morning and, hopefully, get one.” 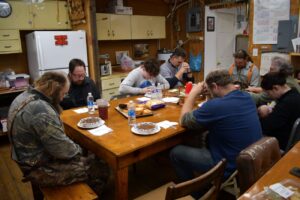 They got back to camp and gathered around the table to share a delicious home cook meal, and Dean said the prayer, “We didn’t get a bear, but we still had a good day and prayed that tomorrow maybe You will bless Matt so his wish will come true.” Then they all headed to bed early to get rested for the next day’s hunt.

It finally quit raining early the following morning, but a lite mist came down that became a fog, and all the foliage was dripping wet. The bear hunters could only see fifty yards in front of their trucks. 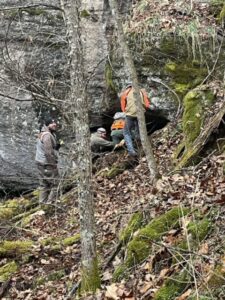 Derek said, “Ryan and I started a bear track on top of the mountain, and it ran off and crossed the bottom road and treed up! We were driving in separate trucks to the bottom road, and I hit another track off the truck and turned the rest of my dogs loose on that track. I kept up with those dogs while a few other guys and Matt went to another tree. Then the pack I was keeping up with treed a bear, so Pete, Dean, and I went to that tree.”

Meanwhile, Ryan and Matt drove down until they reached the bottom and met up with the other hunters, who told them there was a bear treed nearby.

Matt said, “When we got close to the pine tree, they pulled all the dogs back and tied them to other trees. Then they contacted everyone by radio or cell phone and told them they had a bear tree, then soon afterward, all the guides, their wives, and their children joined us.” 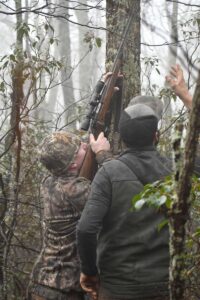 Working together by hollering and whistling, the guides got the bear to turn to the other side of the pine tree so he would have an easier shot. Matt said, “I leaned up against the tree, and Brandon told me where to place the shot, and finally the bear stopped moving for a split second, and he said, “there it is shoot it now!”

Matt looked through the scope of the Remington 7mm-08 riffle his grandpa had given him. He put the crosshair on the bear, squeezed the trigger, and made a perfect shot between the eyes, and the bear slumped down on the pine tree’s limbs. “I knew I got it with one shot because he was not moving anymore.” 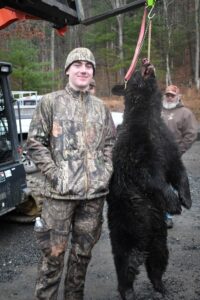 When his bear weighing 178.6 pounds, came tumbling down and hit the ground, he smiled ear to ear, and everyone congratulated him, fist-pumping him and patting him on the back. There were so many people there he was in awe and just taking it all in.

Pete said, “The overall spending time outdoors and the harvest and whole hunting experience for my son was the best part for me.” 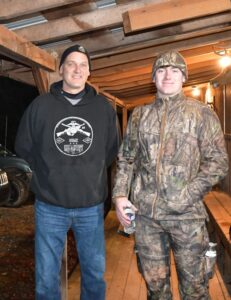 “I enjoyed spending time with these great people, sitting around and talking with them and just telling stories back at the cabin. It was awesome shooting my bear and watching their dogs chasing the bear,” Matt said.

Thanks to Derek Brinkley, Mitchell Caldwell, Toni Cassidy, Branden Via, Dean Turner, Ryan Flynn, Dennis Brinkley, Wilber Stephenson, and their families. Also, Ron and Deb Koch for the beautiful pictures, filming the hunt, and the financial support from the community. Congratulations to Matt on his trophy bear and the incredible memories he shared with his dad and newfound friends! God bless!

If you are interested in getting involved or know of a deserving youth or veteran, don’t hesitate to contact United Special Sportsman Alliance.