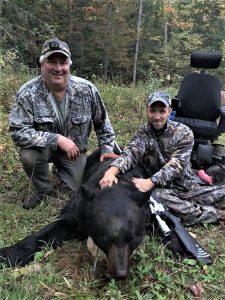 “My guide, Brent, told me he had been seeing a big bear on his camera for eight years.” So I passed by a few smaller bears in hopes of getting a chance at him,” said Chuck.

“On the second day of the hunt, the wind direction wasn’t right for our stand, so I coated the front of the blind with liquid smoke to help cover our scent. Needless to say, when the wind swirled, our eyes watered from the strong smoke smell. I call it “jamming their nose,” said Brent.

“I was looking to my left when Brent put his hand on my shoulder and said, “bear just came out.” So I turned back and watched as he was checking things out and sniffing around. Then he knocked over the big stump with a rock sitting on top weighing about 70 lbs. I pulled the hammer back on my single-shot .308 Thompson Center Encore, and the bear fell like a brick.”

“Chuck’s bear left bait two weeks before the season and came back six days before he hunted. He showed up every day after that. This bear had a track record of disappearing every year right before the season. I changed some of my baiting strategies this year, and it seemed to get more bears on my baits during daylight hours.”

“I am sharing some of the bear with Brent. He took me out to his beautiful property and took the time to make this hunt happen. I want him to have some of the 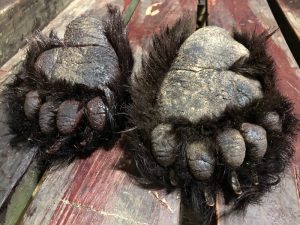 bear to remember our hunt forever.”

“This was my first time taking a vet hunting, and his will and determination were a true inspiration.”

Much gratitude to Michael Shafel for donating his bear license and Brent Kadubek for guiding his once-in-a-lifetime hunt. Congratulations to Chuck on his enormous bear, and thank you for your service helping keep our country safe! God bless!