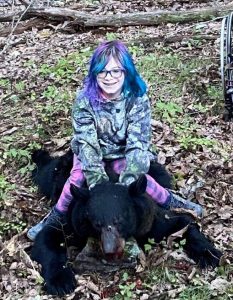 13-year-old Atalie and her dad Kris arrived in Hot Springs, Virginia, on Sunday evening. Their guide, Derek Brinkley, stopped by the hotel to meet them and gave them a rundown of their hunt the following day.

“We had been treeing a nice bear in the same general area several times and had plans to go after him,” said Derek. “But early that morning, just after I picked them up, a local landowner texted me and said he just had a decent bear go by his trail camera, so we headed straight there.”
Derek and Mitchell took a few dogs in to get it started while the others covered the roads surrounding the property. It wasn’t long, and their dogs ended up striking an old track before getting to the field where the owner had his camera set up. Finally, the group released their dogs, and they only went 600 yards, and the bear was treed.
Derek looked at his GPS and saw another road that went right to the tree. “I could see the excitement/nervous look on Atalie’s face when I told her the bear was treed and that we could pretty much drive right to it.”

“As we were heading to the bear and getting closer to the dogs, I thought this was so real. I don’t know how this was all happening, but it’s a great once-in-a-lifetime chance!”

Upon arrival at the tree, they watched the dog tree for a bit then got her in position. They had a 300 blackout rifle mounted on a tripod in front of her wheelchair. She looked through the scope as she stabilized the rifle, put the crosshair on the bear, squeezed the trigger, and the bear fell out of the tree.

“Oh, my, I just did that. I was so happy because I didn’t think I would make the shot correctly.” 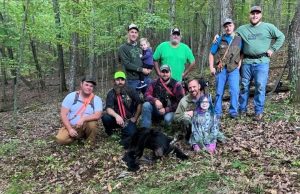 Her dad was standing behind her and yelled out in excitement, “That a girl…Yeah, Wahoo!!!

“When I looked at my dad, he was so happy and excited too, which made me even happier. Then they took me out to see the bear, and I thought it was so cool. They had me sit on it and take pictures.”

Many thanks to Derek and Dennis Brinkley, Mitchell Caldwell, Dean and Peter Turner, Toni Cassidy, Ryan Flynn, and Joseph Stover for giving this young lady an unforgettable first hunt. Special thanks to Tucker Hauser for getting her interested in hunting. Congratulation to Atalie on getting her bear and the incredible memories shared with her new hunting buddies. God bless!