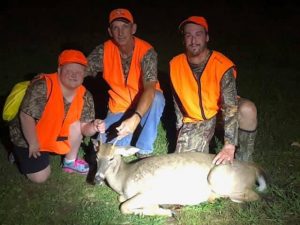 Fourteen-year-old Kate had never been hunting and was excited when her parents told her that she and her brother Garrison, 17 years old, were invited to participate in the IL Dream hunt in Harrisburg, IL.

They arrived at Camp Oxford on Friday afternoon, and after getting settled in, they went target practicing with their guides. The kids were hitting the bullseye, which peaked their interest more and they couldn’t wait to hit the field the next day.

Early in the morning, Kate and Garrison, and their mentors entered their hunting blinds. As the morning continued on, the temperature was climbing, and deer were not moving, so they headed back to camp. Then after lunch and a little downtime, the kids and their guides went back out hoping to get a chance at bagging a deer. 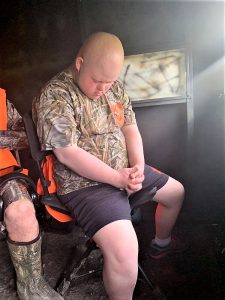 As the temperature continued to climb, Kate got warm, so she took her orange vest and sweatshirt off. Then before putting the vest back on, Kate had her head down and hands folded, and you could see her lips moving as she prayed quietly to herself. Then she looked up, smiled, and asked Dalton, “When is the deer coming out?”

Then shortly afterward, around 6 pm, a deer came in from the hardwoods knoll, and Kate stayed calm and waited until it got into shooting range. Then she looked down the scope, focused on the deer, and gently pulled the trigger; it ran and dropped about 40 yards away.

Robbie said, “Kate was so wound up about getting her deer, and I don’t think anything else at that moment could have made her happier! Her eyes sparkled with excitement along with a contagious smile. Her Mom was ecstatic and jumping up and down in the blind too! When we arrived back at camp, the group was waiting, and Garrison, who had not gotten his deer yet, was excited about his sister and hugged, high-fived, and fist-pumped her.”

Jeremiah said, “We were eating dinner when Garrison told me, “I’m going to make a speech.” I asked him, “right now?” He answered, “Oh yeah!” I said, “let’s get it 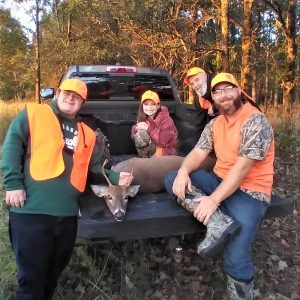 done, buddy!” Garrison thanked everybody for dinner and the fellowship and for the mentors taking all the kids hunting. The courage for him to stand up and talk on point in front of everyone I don’t think I could do. Then after they took our group picture, Garrison and his sister sang ‘Amazing Grace.’ I had goosebumps, and it was so emotional we were all crying.”

The following morning around 5 am Garrison and his father and their mentors were in the hunting blind. They waited patiently in the warm and muggy weather for a deer to present itself, then out of nowhere, a deer was in sight. Garrison looked through the scope, put the crosshairs on the deer, and made a perfect 40 yard shot behind the right shoulder, and the deer dropped in its tracks. Jeremiah yelled out in excitement, “You got him!!” “When we all walked up to the deer, he was all smiles and as happy as could be, and I have to say, so was his 9-year-old assisted mentor Hadley!”

Congratulations to Kate and Garrison for getting their bucks and their unforgettable memories shared in the blind with their parents and mentors. Much gratitude to Robbie Pruitt, Dalton Brownfield, Jeremiah Hanks, and Hadley Hanks for sharing their love of hunting with these beautiful children! Shout out to Mike Stone and the IL Dream Hunt Committee for their participation in another fantastic hunt! God bless!