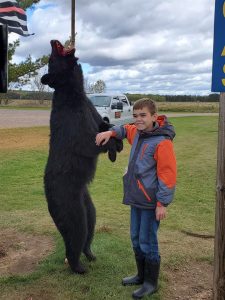 10-year-old Nathan was ecstatic to learn he was going on a bear hunt in Wisconsin. He asked his mother, Jennifer, “Are you for real? What do I pack, and when are we leaving?” Their guide started sending them pictures and videos of bears he saw on the bait, which fed the fire of the young man’s anticipation! His mother, Jennifer, said, “During our long drive for the hunt, Nathan could not stop watching the clock. He followed our route by map and landmarks from Pennsylvania to Wisconsin. He was mesmerized by the scenery and the changing of the weather while observing the color of leaves.”

Arriving in Wisconsin, their guide Tucker said, “We showed Nathan and his Mom how to bait; we explain the importance of placing a rock on the top of the stump cover and using different types of attractive bait. Nathan added, “I used cookies, caramel, and peanut butter, and it smelled good.”

Early the following morning, the guides checked the baits and trail cameras, but the bear came in around 10:30 pm and was long gone. Tucker said, “We didn’t get on anything on Friday morning, but around noon we rechecked our baits and had a recent hit! We released our dogs and got on a long run of about 15 miles. We were on a road crossing, and Nathan got to see the bear cross it with the dogs close behind it. Unfortunately, we ended up losing it in the swamp when it 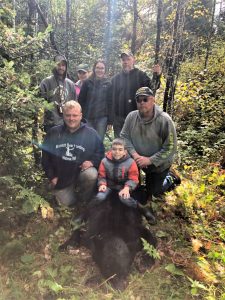 jumped in the river.”

Nathan added, “I was thinking, where did it go? That bear really needs to get treed!”

Later that evening, the word got out that the bear got away, and the following morning more bear hunters showed up to help. Jennifer said, “It was like someone called in the Cavalry, so many wonderful people working together trying to help us, they were like a small village.”

They found a recent bait hit from one of the other group’s baits and started that one with great anticipation. The bear ran about two miles, crossed the road in front of them, and went another 400 yards and treed.

Nathan said, “When we got close to the tree, all you could hear were dogs barking, and there were many people with their dogs. After the guys helped me get my gun steady, I looked through the scope and put the crosshairs on it, squeezed the trigger, and GERANIMAO, the bear came down!” 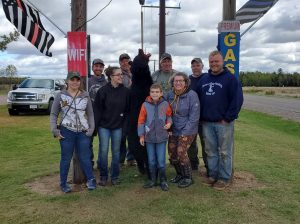 “This hunt gave my son more motivation to be courageous. We didn’t have to talk about the hospital or the tribulations he went through. We were able to put the thoughts of upcoming tests on the back burner and felt free from scans and checkups.”

Roberta said, “I cried hearing the wonderful news that my Dad’s memorial was covering the expenses for Nathaniel’s hunt. When my family received the pictures of him and his bear, it was super joyful. It was like we got that bear! It was a very exciting day! Everybody that can help others that aren’t as fortunate as us should because that feeling is way better than any feeling that you will ever have!”

Much gratitude to Alexis Daggett for donating her license and Tucker Munsch and Tom Munsch, Emma, Brent, Mike, Zack, Zeke, and Brian for helping make a young man’s dream come true. Special thanks to the Dennis Jasch Memorial for their financial support. Congratulations to Nathan on his trophy bear and the unforgettable memories and camaraderie shared with his mom and hunting buddies! God bless!