Big red stag for a young girl in pink!

11-year-old Nory, her dad Bryan, and Bob arrived at the Hidden Oaks Ranch on Thursday mid-morning. The weather couldn’t be more perfect for her hunt with blue skies, low winds, and temperature in the 60’s. Bob got the deer rifle and bipod rest setup in the Polaris Ranger and made all the preparations for their imminent hunt in the Texas brush country.

“Before we got into the Ranger, Bob told me what kind of shot we needed, where to shoot it, and also to wait if there was an animal near it to get a clear shot,” Nory said.

“I had her dry fire a couple of times so I could watch her,” Bob said, “I didn’t do any live ammunition, but she was perfect. After I was comfortable with that, we headed out looking for a big red stag.” 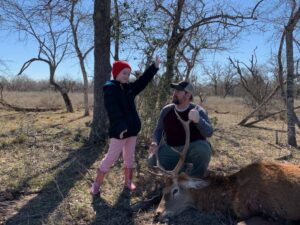 Nory said, “when I saw the red deer, I thought they were huge!” After some time, they spotted a big stag that she wanted, but a good shot did not present itself, so they moved on to another location. Arriving there, they saw another nice stag out in the field, but he too would not offer a good shot. “It’s like he knew, Bob said, “so we returned to the location where we first saw all the deer.” The big stag soon came back in view, but it had company with an axis deer walking behind him and another walking in front of him.

“The deer were all eating and would put their head down and then pop them back up and look at us then started eating again,” she said.

When the stag was in clear sight, Nory looked through her rifle’s scope and waited until it turned sideways, giving her a good broadside view. Bob said, “okay, you’re ready; you are on it; take the shot.” She made a perfect shot behind the right shoulder, and the 3 X 2 crown 450# stag dropped in its tracks!

“I got the hunting fever and shot it right where I was supposed to. Bob padded me on the back and said I made a really good shot, and Dad said, ‘Good job, Nory!’ They were all proud of me.”

“We are going to frame the brass from my shell along with a picture of me,” Nory said, “I want to thank Bob, Tommy, and Sharon just for the experience.”

Many thanks to Tommy and Sharron Kidd and Hidden Oaks Ranch, Bob Samson, John Brown, and Modern Memento Taxidermy. Congratulations to Nory on her trophy stag and the beautiful memories she shared with her Dad and newfound friends! God bless!