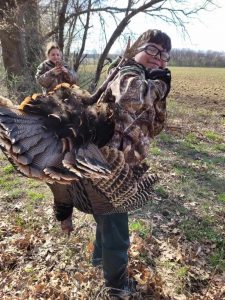 At 4:30 am on Saturday, 11-year-old Gianluca and mother Liz met up with their guide Mike. After loading their gear into his truck, they headed out to an area where many nice gobblers were spotted. They crept through the field and into the blind and got situated so Gianluca would get a good shot if the opportunity presented itself.

As they listened, they could hear the distinctive beat of a turkey’s wings as it flew out of its roost, followed by scattered gobbling. Though expectations were high, no toms cooperated, so the team decided to try another spot. While driving to their new area, Gianluca spotted a turkey behind a tree, and Liz saw another one out in front, an excellent sign!

After a quiet walk into the blind, they sat down to listen and observe. A fair distance away, they spotted a gobbler. Mike used his diaphragm call to make a variety of turkey sounds, and the tom came trotting into around 20 yards and was strutting, spitting, and drumming while the excited hunters looked on! Gianluca could not get the gun in a comfortable position in time to take a shot, and the gobbler instantly flew away toward the sound of turkeys fighting. With the woods quiet, they decided to take their lunch. Mike used the time to have Gianluca shoot again, and he was right on target.

Back in the blind after lunch, the hunters spotted a turkey about 400 yards away in a field. After some persuasive calling by Mike, the gobbler was in about 200 yards as a couple of hens scattered!
Another call and the tom began to head toward an excited Gianluca, who asked, “why is it taking him so long?” Mike bent over and whispered, “he has short legs!” The turkey was about 100 yards out, and Mike glanced out of the corner of his eye and saw ten jakes come out in the field south of them. He said, “We have ’11 bird’s eyes’ watching us, and we have to be careful, or they will make us.”

Mike started calling, and the big tom started running towards the remote control jake decoy near the blind. Gianluca set the 20 gauge on the blind window and watched through the scope as the tom got closer. He said, “I was watching and watching, and when the bird got in front of me, I knew what position I wanted to shoot him, so I would get the bird and not the decoy!!” The tom slowed its pace a bit, and that was all Gianluca needed as he made an excellent shot, and the gobbler

Liz said, “we were all hooting and hollering and giving high fives because it was so exciting!” Gianluca exclaimed, “My heart was racing, and I was shaking because I was happy, I was looking forward to eating it!”

Many thanks to Mike Wiesner for mentoring his fantastic hunt and Randy Yonke for donating his property. Congratulations to Gianluca on his nice tom and unforgettable memories shared with his mom and Mike! God bless!