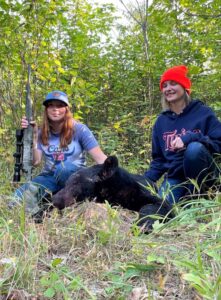 Late that evening, Savanna and her mom, Cindy, arrived at the Stoney Lonesome Bear Hunter’s cabin in Winter, Wisconsin.

Savanna said, “Although it was late, everyone was up. They had supper waiting for us, and we all talked about the upcoming hunt. I was ready to chase a bear track in the morning!”

Steve Salmon said, “I like to explain to everyone that it will be a long, tough day. We will get up early and check baits, so we can’t be dragging our feet because there are other bear hunters with baits in the same vicinity as ours across the road. A bear can hit multiple baits, and we must park on the road by our bait if it is the bait we want to run. That lets other hunters know we are running this bait. The hunting talk left Savanna all wound tight and not wanting to go to bed. The next morning at 4 am, when we got up, I was surprised she was already up, bright-eyed, and ready to go.”

Following an early morning delicious breakfast, Savanna, her mom, and Steve headed out to check their baits while the other hunters also checked their assigned bait.
Steve said, “While our dogs were still running on the one we turned loose, our other hunters let us know they had a bear treed. So, we got back into the truck and drove near where the bear was treed.” 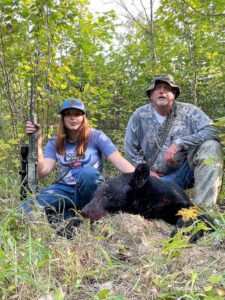 Savanna and the hunters with her had a 500-yard walk-in that took them about an hour! They watched the dogs’ tree for a bit upon arrival at the tree, then tied them back from under it. The bear was 70 feet up in a big pine tree with big limbs. One of the hunters cut a shooting stick to rest Savanna’s gun. Then they all moved around until they could see the bear well, and she could make a good shot. Steve knelt on the ground beside her and held the shooting stick stable while Savannah got the gun set up. 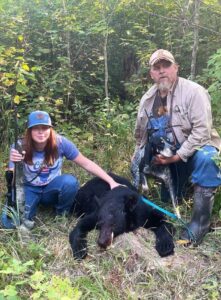 Savanna said, “I was confident in a standing shot, so I looked through the scope of my 7mm08 Savage Arms youth rifle, put the crosshairs on the bear’s head, took a deep breath, and gently pulled the trigger.”

Steve said, “It was a direct hit, and she could not have hit it any better. It was unbelievable, and the bear was going to drop right there, but I thought he might get hung up in this tree, which would mean we would have our work cut out for us getting it down! So I took the gun from her, put in another shell, and then told her to shoot him again, both times right in the head, and fortunately, the bear fell out of the tree.

Savanna added, “We ran towards where it fell to make sure it was dead, and then we all got excited.

Cindy said, “When the bear was up a tree, we all watched her skillful shot. The bear was moving so much that it was tricky. If my dad were here today, he would be a very proud grandpa. Savanna learned how to help prepare the animal and what cool things can be done with the meat and the hide.” 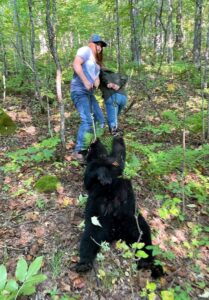 “Everyone you meet during the hunt is nice, and they are what really makes the whole experience so rewarding People are friendly enough to let you do almost anything you want, even horseback riding.”

“Just the thrill of being there and watching these kids succeed, knowing we are sending them home happy. Every one of these kids brings tears to my eyes. My standard on hunting has changed; having a kid with me is my goal,” Steve expressed with emotion.

Thanks to Ryan Caputo for donating his bear license, Steve Salmon, Scott Wendt, and the Stoney Lonesome Bear Hunters for their continued participation in USSA bear hunts. Congratulation to Savanna on her trophy bear and the beautiful memories shared with her mother and new hunting buddies! God bless!