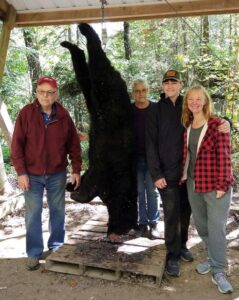 In 1970 a bear group was established in Clam Lake, Wisconsin, which later took the name ‘Dogtown.’ Bob and Sharon Wood, longtime club members, have helped mentor bear hunts for USSA special hunters since 2007.

Initially, thirteen-year-old Huntington was thrilled to learn someone had donated their bear licenses to him and thought he would be going on his first hunting trip. But, not long after he received his license, he had surgery and could not participate. So he handed down his bear license to his fifteen-year-old brother Ian giving him a chance to bear hunt.

Shortly after arriving at Dogwood camp, Ian and his mother, Lisa, got into Wood’s truck and headed out to bait. After Ian helped them put out the cookies, granola, frosting, and other attractive baits, Bob explained how the bears would come in, knock the lid off, and eat the bait. Arriving back at the camp, they had supper with all the hunters and then sat around the campfire while they shared stories of past hunts and answered all of Ian’s questions about how they trained their hunting dogs.

Early the following morning, the guides looked through the pictures on their cellular trail cameras and picked the location they would start. Arriving at that bait, they let out the start dogs, and once they picked up the track, they started barking. As the track warmed up, the Dogtown Hunters released the other pack dogs, which hurried to catch up with the other dogs, and about 45 minutes later, the GPS showed the bear treed at 1 mile and two-tenths from the hunter’s position. 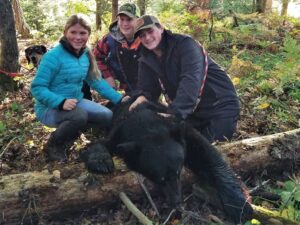 Everyone excitedly took off running; they got out of the hardwood, through the swampy area, and saw the bear around 50′ up in a big pine tree. Ian was ecstatic, and his heart was beating fast, and as they approached the tree, he came down with ‘Bear Fever’, shaking intensively. Mark and Rick stood close by his side to assure him while he steadied the .243 rifle and then made a perfect shot. The bear remained in the crotch of the pine tree for a bit, then suddenly picked his head back up and fell backward out of the tree.

Sharon said, “Ian was excited and super overwhelmed with his first shot, and he dropped the bear. Everyone congratulated and hugged him, and he had tears too; it was pretty fabulous.”

Then the younger guys in the group took turns for over three hours dragging the bear out of the woods and swamp. When they got it back to camp, they weighed it in 255# field dressed.

Bob added, “It’s important that the hunter enjoys the whole experience from what it entails to the baiting at night to checking bait in the morning to treeing the bear and shooting it themselves.” 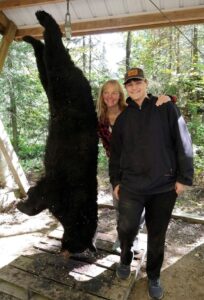 “This was an experience I didn’t realize my son needed. He truly grew as a young man that day. It’s time we will both always remember, and I’m blessed to have been able to be there with him. It was such a bonding moment and full of many emotions. The entire family/extended family at Dogtown makes the hunt what it is, and you a part of their family the whole time you’re there. You can’t help but love everything about it. We both had tears the morning we left.”

Thanks to Greg Hess for donating his bear license, and the following Dogtown members Bob & Sharon Wood, Mark Gorkowski and his grandkids Kaitlyn and Mark, Tim Crom, Rick French, Jasen French, Ryan French, Mike Carl, Darrell and Jen, and Jeff Crom, Dick and Rob Statsholt and Fred Wieseman for their continued participation in USSA bear hunts. Congratulation to Ian on his trophy bear and the beautiful memories shared with his mother and newfound friends! God bless!

If you are interested in getting involved, want to donate your 2023 bear license, or know of a deserving youth or veteran, don’t hesitate to contact us at United Special Sportsman Alliance.