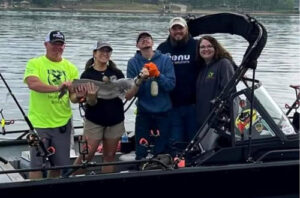 At 5:30 Friday evening, the South Carolina State Troopers escorted the families from the hotel to the Richburg Fire Department, where they had a pizza party and met their captains. The fellowship and anticipation shared by all were contagious. Early the following morning, they escorted the families to the landing at Lake Wateree.
Justin Whiteside and staff were waiting on the dock to help assist families in their boats. After everyone was onboard, Justin gave the Captains the head out signal, and they took off as the roar of the motors could be heard across the water. As they watched the last few boats off in the distance, Justin excitedly said, “2022 USSA, and they are gone fishing!” 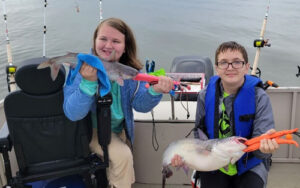 Benji and Lindsey Brown hosted Maguire and his parents, Myra and AJ, on their boat. Benji said, “We decided to drift fish with 6 rods and used only gizzard shad. We were only fishing for 10-15 minutes before catching our first fish.”

Myra added, “Then it was like one fish right after another; we were constantly pulling in fish. We caught 31 fish total, and the biggest one weighed 15 lbs.”
Maguire beamed with excitement, “My fish was really big!!” 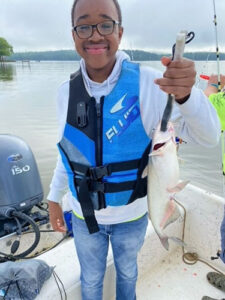 “As Maguire was reeling in his 15th fish, we were fortunate enough to have two more rods hook up with fish. Maguire wanted to reel in all three at the same time. He was so happy. We even had to get his dad to assist. It was definitely the best moment of the day.”

AJ said, “The last rod Benji pulled in, which he had just thrown out 5 minutes earlier, had a fish and raised the number to 31. Catching one fish after another and letting Maguire drive their boat for the remaining hour back to the dock made it an exciting day.” 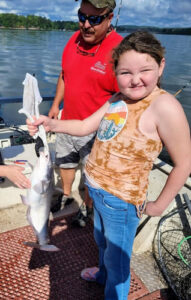 Myra expressed, “We have only been able to take our son fishing off the bank or a pier, but not a boat. He would never have experienced what happened today if there wasn’t a program like this. We enjoyed ourselves and had a good time, good weather, good catch; it was perfect.”

Benji and Lindsey said, “We want to share the blessings that we have been given to us by the lord with others in any way we can. Using what we have to make a child’s day who doesn’t have the same opportunities as often as us is a privilege and honor. Sacred scripture such as 1 Peter 4:10 reminds us to ‘Use your God-Given Gifts to serve others,’ and it is our distinct pleasure to do so!”

The twenty-one boats began to return around noon, and the Captain’s smiles were as big as the children’s, for everyone caught fish and made incredible memories!
One of the fun traditions of this event is the USSA kids giving the event coordinator Justin a free haircut. The USSA kids stood in line eagerly waiting for their chance to give ‘Shaggy Justin’ a well-needed haircut and shave. Maguire was so excited that he cut the line to be first, and a mop of hair began to fall to 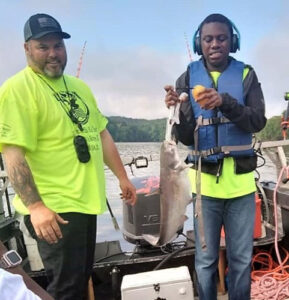 Much gratitude to Justin Whiteside, USSA South Carolina Rep., and his beautiful family, Captains, and volunteer staff for their dedication and hard work in making this event top-notch. Also, the donors and sponsors whose continued financial support make wishes possible for the beautiful families we serve. Finally, shout out to the South Carolina State Troopers and the Richburg Fire Department for donating their time and facility. Congratulations to all the families and Captains on their bountiful catch! God bless!