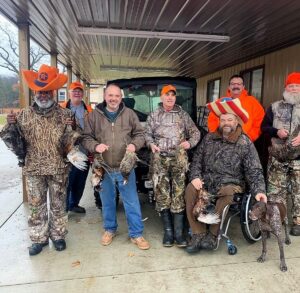 The USSA veterans visited central Wisconsin’s Highground Veteran Memorial Park the day before their hunt. The memorial is a tribute to fallen veterans and honors those who served in the armed forces. After enjoying their time there and reflecting on the universal brotherhood of service, they headed to ‘The Farm House,’ where they lodged at Woods & Meadows.

Upon arrival, the veterans sat at the table with USSA’s Vet Coordinator, Darrell Kauth, and volunteer Fred Krouse. They enjoy a delicious supper of venison, potatoes, and carrots while sharing fellowship throughout the evening. The following morning, Marine veterans Henry and Berry prepared breakfast for the other veterans who served in the Army.

When the vets arrived early the following morning for the hunt, the weather was 32 degrees, raining, with winds 15 to 20 mph. Army veteran Derrick said, “The birds were less likely to fly, so we knew it would be a little more challenging to hunt than if the weather cooperated.” 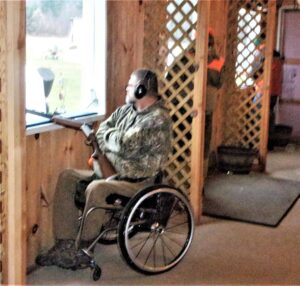 The first event was trap shooting out of the Five Stand, operated by Fred Krouse. Derrick explained, “It’s a lot like trap shooting, except that you don’t know exactly where the clay pigeon will come from. There are five different throwers that the bird can come from, so instead of getting clay pigeons or birds that continuously fly from the center away from you, you have some flying towards you, away from you, side to side way up high, and way down low. It’s more realistic to a hunting situation where you don’t know exactly when the bird will fly or in which direction they will go.”

Darrell added, “The vets all shot two rounds of five stand and just had a blast; some were pretty good shots.”

Following the five-stand clay shoot, they headed out for their morning guided pheasant hunt. Derrick said, “My friend Terrance and I were using track chairs for the hunt, so we stayed on the trails of the field we were hunting. Then a bird flew up relatively close to me, and when a bird is in front of you, it’s time to take a shot, and that’s what I did.”

Darrell added, “Then the next bird was up, and everyone was shooting and having fun, and I think everyone shot a few birds.”
Derrick said, “After the morning hunt, we got some group photos and saw all the guys who had some success getting shots and some birds, and everyone was happy for each other, and I really liked that part of the hunt.” 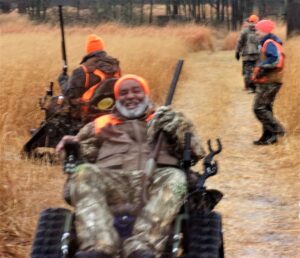 Following their early dinner consisting of barbecued pulled pork, potato salad, and coffee, they sat around discussing the morning hunt. After looking at the weather, they realized they had about a two-hour window where it would only be misting and no rain. So, their guide Amy, her dog, and five vets headed out again to the same field while Darrell and two others hunted in a different area.

Darrell said, “When there is rain on the grass, the dogs don’t hear as well, but my Chesapeake never worked better back and forth. Everything he got on, he put up and brought back 3 or 4 birds out of the five.”

Army veteran Bill added, “Seeing Terrance and Derrick hunt from the track chairs and be independent was inspirational. This hunt was the first time I had spent with a group of veterans from USSA. It was a pleasure and an honor to be with them, seeing the smiles on their faces during the day and spending time and sharing stories with them the evening before.”

“They ended up with eleven birds in the morning and eleven in the afternoon. So twenty-two out of thirty that’s a good average for that many birds. And regardless of the weather, every bird flew for us,” Darrell exclaimed.

Much gratitude to Darrell Kauth and USSA’s volunteers for their hard work and dedication to continue serving those who helped to keep our country safe and out of harm’s way! Congratulations to the veterans on their successful hunts and the delicious game birds they will enjoy with their families! Thank you for your service! God bless!

If you are interested in getting involved or know of a deserving youth or veteran who might want to attend USSA’s free events, don’t hesitate to contact us at United Special Sportsman Alliance.