Families arrived at the YMCA Camp Cha-La-Kee early afternoon, and then the children were fitted for their life jackets and settled in their cabins. The children were filled with anticipation about their exciting fishing trip with their fishermen taking place the following day. After 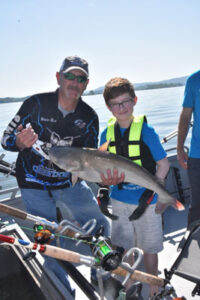 Wayne Reed said, “We were trolling dragging baits on the bottom, and we had a small piece of skipjack herring on the middle row and dragged it straight up behind the boat when the fish hit it hard. Then we reeled up on the other lines on the boat, and the fight was on.”

12-year-old Skylar said, “I had it on the line, and it put up a really good fight! I think he weighs around 15 to 20 lbs. The fish was giving a hard fight, and when I was reeling, it went deeper and pulled very heavy.”

“Skylar fought it like a professional fisherman,” said Reed.

“One of the rods got hammered with a strike; soon as I gave the rod to Hayden, the fish just started swimming at the boat. I cranked down on it and finally caught up to it and handed the rod back to him, and the fish quickly took off and almost got the rod pulled out of his 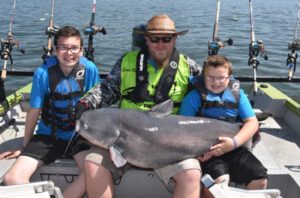 hands! We picked it back up, got some more hands-on, and finally got it in the net. Once the family saw the fish, it was all squeals and hollers; just a ton of fun,” said Cedric Poyner.

“I was holding on to the rod, and it started to bend. While reeling it in, I felt like it was a huge catfish or something. It was fun. I was very happy and excited when it got on the boat, and I named him ‘Mr. Whiskers’. The best part of it was catching a big catfish, and I could pet him,” Hayden exclaimed.

His mother Cora rejoiced, “My boy caught a big one; it’s the biggest fish I have seen since I was a little girl.” John beamed, “It made me the happiest dad in the world to see my son bring in a big old whale like that. He had a ball, and the fish almost pulled him and his pole into the lake. I’m so proud of him!”

His brother Chase 12, with a big smile, exclaimed, “Oh was Hayden excited. I thought he was going to get pulled in. The fish was jerking him pretty hard. I was excited too, but never thought it would be 73#s. I thought maybe more like 40#. When Cedric pulled it up out of the water, it was humongous and looked like a shark to me, and he was happy, and I was happy, and my dad was happy too!”

Poyner added, “Seeing the pure joy and excitement in the children’s faces when they get to see what I do for fun. Having them experience a little bit of what my hobby is and seeing a fish like that from day one is amazing.” 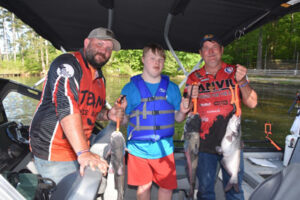 Lewis Miller held open their livewell while Donnie Fountain reached in, fastened the catfish with a lip clamp, and then pulled it up. Donnie said, “He’s a happy cat.” Their young angler Ross looked down at his fish with amazement, and his smile was enormous. He placed his right hand on the fish and held it there for a while; he was proud of his catch. Then Donnie leaned over, kissed his fish, and told Ross it was his turn. After Ross kissed his fish, Donnie looked up and said, “Priceless!”

After the boats returned around noon, families gathered together on the pier and showed their catfish to the crowd. They were in awe when ‘Mr. Whiskers’ weighed in at 73.4 lbs. While sharing their fishing stories, you could also hear laughter among the children while playing on the pier. The fellowship and friendships made among the families were inspiring. Following a delicious lunch, all the children 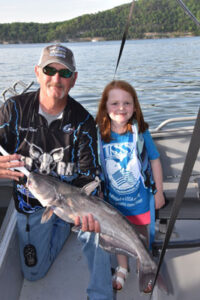 received a Shakespeare fishing rod and tackle box from Donnie and Lonnie Fountain. Then the boats headed back out on the lake with the sun shining brighter with temperatures in the mid-’80s.

Later that day, Donnie and Lewis returned to the dock with Ross and his family. Again, luck was on their side as they showed off the additional catfish they caught, raising the number to three. One for each member of their family. Lewis added, “It was an honor to be able to take this young man out and put him on some TN river catfish!”

Wayne Reed said, “We ended up moving around by the dam due to the boaters and wind, and there was an old submerged tower, and we anchored up in front of it and let our bait drift back and waited until it finally took.” After landing the fish, Six-year-old Keegan stood next to Wayne and looked down at her caught fish. Then, she said, with a joyful smile, “We cast them all out, reeled them in, and we got one! ” Then, while looking down and pointing to her catfish, she added. “And, it was this big! Bigger than my brother fish!”

Wayne exclaimed, “she reeled the fish in all by herself!”

Thanks to the YMCA Camp-Cha-La-Kee for donating their facility, hospitality, and delicious home-cooked meals. For their hard work and dedication in coordinating this fantastic event, Joe Davis and his volunteer staff. 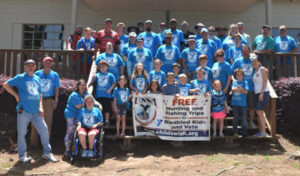 Congratulations to the beautiful families for their catch of fish, fellowship, and beautiful memories. God bless!