Families were catching fish and making memories on Oneida Lake 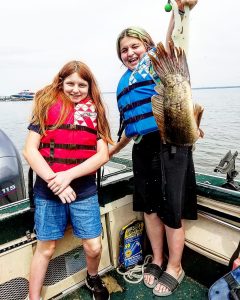 For six years, Jason Powers has mentored at the USSA group fishing trip on Oneida Lake. He enjoyed spending time with special families while sharing his sportfishing skills. He was thrilled to hear he would be guiding two families for the upcoming event.
Noah, 14, said, “I was really excited when my dad told me we were going fishing.” Early that morning Noah, and his dad, Tommy, met up with Jason. It wasn’t long, and they were on fish. “When Jason handed the rod to me, the fish was very strong, so I had a little trouble, and he helped me reel it in,” Noah said. “I felt happy when he brought the fish in on the boat because I caught that fish!”
“We also caught about 20 pickerel and pumpkinseed sunfish,” Tommy said. “Noah caught a walleye weighing 4 to 5 pounds on his fishing pole, and he was ecstatic.”

“The best part of my trip was reeling in the fish, the boat moving fast, and fishing with my dad!”
Jenna, 13, and her sister Jessa,11, had always wanted to catch a big fish, so Jason ran the boat all the way to the south shore of Oneida Lake. Jason said, “I wanted to get in the bay where it’s not windy and try to get on some sheep head. My plan was to sight fish for them so they would have a good chance of catching them.”

They got into about 4 to 5 feet of water, and there were sunfish and perch everywhere. Jason said, “We were not fishing long, and I looked down and saw this big dark spot on the bottom, and it was a nice size bowfin. I went to throw the jig in, but the fish swam off. I looked over to the right, and there was an even bigger one still there. I cast my jig in the water, and it dropped about 6 inches in front of the fish, and it quickly took the bait. I set the hook, and the fish went crazy. I handed Jenna the rod, and she did everything she could to hold on to it.”
Jenna said, “The fishing rod looked bent in half because it was really heavy! I kept the reel low and close to the water; otherwise, it would get away, and I just kept reeling as fast I could.” 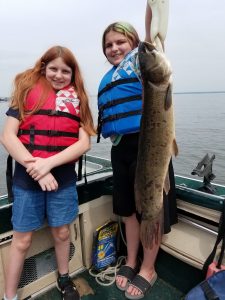 “We got lucky, and it swam right to the boat and then swam right into the net,” Jason said. “I pulled it into the boat, and the bowfin was 28 inches in length and weighed around 8 pounds.”

The girls also caught rock bass, pumpkinseed sunfish, bullhead, and small perch but released them all. Jason asked the girls what the biggest fish they ever caught was, and they said, “no fish as big as this one!”

“I feel blessed that trips like this are available; parents also need a break from the day-to-day activities,” Tommy said. “We were privileged to fish with Jason. He knows what he is doing and has a boat all set up for fishing.”

Congratulations to the families on their great catch of fish and the unforgettable memories they shared with Jason. Many thanks to Kim and Rob Goffredo and the volunteers who help prepare and coordinate the fishing trips, and Kirsten Shepard for taking the beautiful pictures. God bless!