Father and daughter share their love of bear hunting! 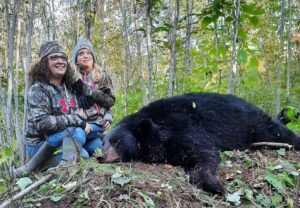 Ten-year-old Chelsea had always wanted to go hunting and had finely honed her marksmanship skills at the USSA rifle range, hoping that opportunity would come her way. In time a call came to tell her a generous hunter had donated his bear tag and her dream hunt was about to become very real!

Not long after Chelsea and her Mom arrive for the hunt, they headed into the field with their guides Joe Potter and his 16-year-old daughter Makayla. In nearby proximity, in case help was needed was their backup crew, otherwise known as ‘Kickapoo Valley Bear Hunters.’ The eager ladies helped the guides bait and get ready for her dream bear hunt. 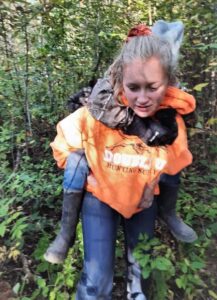 They were up early on Friday morning, and it wasn’t long; they treed up a couple of small bears. The group started another bait, and later that afternoon, they came into a brushy thorny field, which was very difficult for Chelsea to get through it. Makayla said, “get on my back and bury your head in my neck, and I will carry you in!” While piggybacking Chelsea, Makayla followed quickly behind her father Joe, and approximately 300 yards later, they saw a big black bear up in the tree.

Chelsea worked around the thorny brush with Joe and Makayla to find the best view for a clean shot. Joe then handed her the 6.5 Creedmoor rifle, Chelsea looked through the scope as she stabilized the gun, put the crosshair on the bear, squeezed the trigger, and the massive 321-pound bruin fell out of the tree with a thud! ‘Uncle Clay’ from the group yelled out, “This is a bear of a lifetime; it has a V on his chest!” 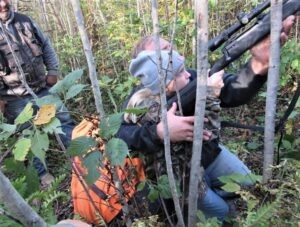 There were a lot of tears of joy expressed following the hunt. “I had a tear in my eye, too,” said Joe Potter, as he fondly recalled the teamwork everyone had shown Chelsea and her Mom.

Many thanks to Daniel Berry for donating his bear licenses, the Don and Bonnie Potter Estate, and Joe and Makayla Potter for giving Chelsea and her mom an extraordinary hunt. God bless!