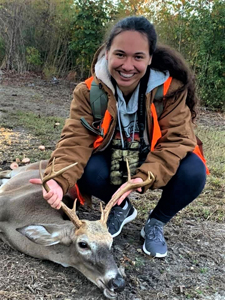 Clayhill Hunting Club has always enjoyed passing on the tradition of deer hunting to their children while teaching them the importance of providing healthy food for their families. They have shared their passion for over a decade by mentoring USSA children.
When four children and their parents arrived at the Clayhill location, eight miles west of Greenville, North Carolina, the weather was sunny and warm. After getting settled in, they went target practicing for the first time. Gina, Isabelle’s mentor, said, “She did great shooting; however, she was nervous and disliked noise, so we used earplugs and muffs.” As the kids began hitting the bullseye, their interest peaked even more, and they couldn’t wait to hit the field! 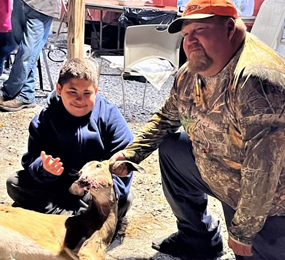 Gina said, “We had a small buck come out five minutes after being in the stand. Isabelle was unable to get him in the scope. He ran off, and we waited for another to show. After seeing a buck, she was determined she wanted a buck. We saw many doe, but she wanted to wait. I told her we would take whatever she wanted, but the buck never returned, so we headed back to camp.”

Good luck was on 14-year-old TJ’s side on Saturday morning, and he bagged a button buck with his mentor Gray. But, unfortunately, Isabelle and Gina never saw a deer and decided to try a different stand later that afternoon.

It was their last chance at getting a deer, and pressure was on 14-year-old Isabelle and Gina when they quietly entered the blind. They waited for what 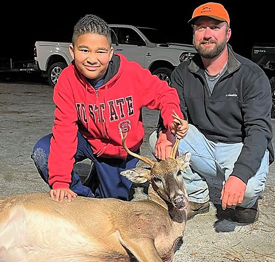 seemed like forever, and then a buck came in from the hardwoods into the shooting range. Unfortunately, Isabelle could not find it in the scope, and it ran off, but good fortune smiled on the ladies, and he was back out ten minutes later.

Gina motioned for Isabelle to take the shot as soon as the buck was in shooting range. She looked through the scope, put the crosshairs on the buck, and squeezed the trigger, and he dropped in his tracks. 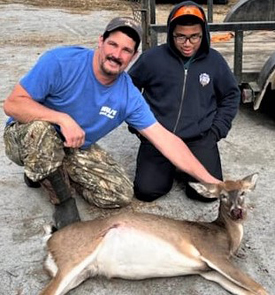 “We screamed and jumped and hugged, and it was such an amazing moment. Isabelle smiled so big and beautiful it seemed to lite up the world.”
Indeed, the smiles of children in the outdoors make the world a better place for all!

Congratulations to Sebastian, Eli, TJ, and Isabelle for getting their first deer and their unforgettable memories shared in the blind with their mentors. Also, shout out to Clayhill Hunting Club, mentors, and volunteers for participating in another fantastic hunt! God bless!

If you are interested in getting involved or know of a deserving child or veteran, please contact United Special Sportsman Alliance.