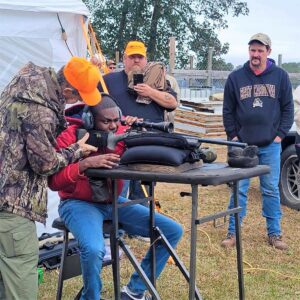 Farmville is a small town in North Carolina’s Inner Banks region that lives by its motto, “Honoring Our Past, Shaping our Future.” Clayhill Hunting Club strengthens this precept each year by sponsoring a USSA group deer hunt for children with special needs.

Five USSA first-time hunters and parents arrived at Clayhill midmorning on Friday. After settling in, they had a delicious lunch and went target practicing for the first time. As the kids began hitting the target, their interest peaked even more, and they couldn’t wait to hit the field with their mentors.

11-year-old Noah said excitedly, “I hit the bullseye right away and won the shooting contest!” His mother added,” Noah’s dad served fourteen years in the Army and was an excellent marksman; it had a real impact on him too.” 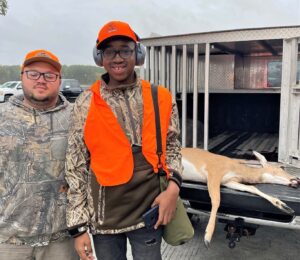 Soon after, the children and their mentors headed out to their blinds, but no deer were spotted, so they returned to camp and got ready for the next morning’s hunt.

Not long after daybreak, a doe wandered out in the field in front of 12-year-old Isaiah and his guide Dustin. Isaiah said, “When I first saw the deer, I was excited, and my aim wasn’t steady when I took my first shot and missed, but I got it on my second shot. I was happy about my deer, and it was fun helping Dustin drag it back to the truck.”

Noah and his mentor Douglas were waiting patiently in their stand when a doe came into the field in front of them. “When I first saw the deer, I was unsure because I love animals, but it was an experience I wanted to try to understand better why people hunt.” After the deer got into view, he looked down the scope and pulled the trigger, and it took off running. Noah added, “I knew I had it! Finding his deer Dustin took pictures of him with his doe, and they returned to camp to show everyone. 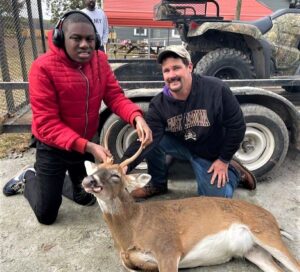 It was midmorning when a nice 3-point buck walked out into a lane in front of 17-year-old Tyler and his guide Gray. Shortly afterward, Tyler made a perfect shot, and the buck was down. His mother, Umeika, said excitedly, “Oh, my son had fun! He is sensitive to noise and had to wear headphones, and when he and Gray returned with the deer, he was happy and carefree but tired. Everyone gave him a high five and told him he did a good job.”

Following a delicious lunch later in the afternoon, all the kids and their mentors headed back to their blinds, hoping a deer would come out. 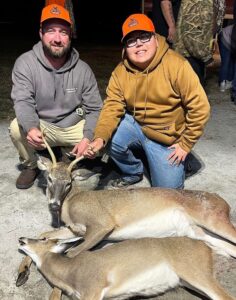 Matthew, 18, and his guide Bryant had yet to see a deer, so they decided to try a different stand. Matthew said, “We saw a doe come out and a cow horn buck behind a tree. The doe got close, and I looked through the rifle’s scope, got it in the crosshairs, and pulled the trigger. I was excited, and it fell right on the ground. Later, the cow horn buck returned, and I got him too.” His mother, Amy, added, “Bryant took the time to get to know us, so there was no question about him taking my son alone hunting.”

Later in the afternoon, Noah and Douglas spotted a doe and fawn coming out into the field. Noah said, “I knew we couldn’t shoot the fawn. Then a buck came out, and the doe and fawn ran away. So, I made a perfect shot, and it dropped in its tracks.” His mother, Denise, said, “We were proud of Noah, getting his buck and doe because he was struggling a bit about going hunting, but then he understood it was providing food for the family. He trusted his guide and had a good time.” 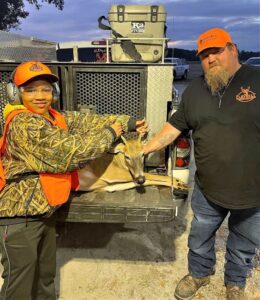 8-year-old Kristina and her guide Kaila had sat patiently throughout the hunt, hoping to see a deer. Kristina excitedly said, “I wanted a girl deer, and when it finally came out, I shot and got it! I felt good!” Her mother added, “I was excited for my daughter because she got her deer and had the courage to try a new experience.” 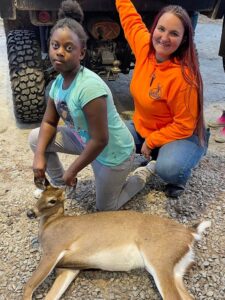 Denise said, “When you have kids with special needs, you wouldn’t think opportunities like hunting are available—then finding an accommodating and caring place that helps make it happen opens up a whole new role for them.”

Gina Vandiford, USSA North Carolina Representative, added, “What an amazing event growing together and making the world a happier place one wish at a time.”

Special thanks to the Grady White Boats, Jack and Kathy Allen Farms, Perks Processing, Mike Tree Service, Charles Wilkerson, and the other donors for their financial support. 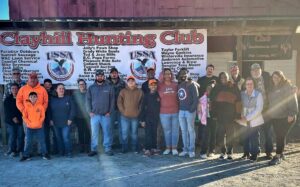 Congratulations to Kristina, Tyler, Isaiah, Noah, and Matthew for bagging their first deer and the fantastic memories shared in the blind with their mentors. Thanks to Clayhill Hunting Club, mentors, volunteers, and the North Carolina Wildlife Resources Commission for participating in another fantastic group hunt! God bless!

If you are interested in getting involved or know of a deserving child who would enjoy a free hunting or fishing trip, please contact United Special Sportsman Alliance.