Fishing and Reminiscing for Veterans! 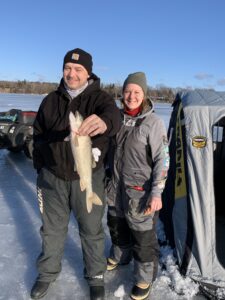 Jenn retired after serving 23 years in the Air Force, and her brother Darren, following his six-year active duty with service in the Army National Guard. They grew up in a family with eight children who have all been or still in the military.

“We were deployed at the same time once,” Jenn said. “I was on the island Diego Garcia, and he was in Iraq. Let just say I had it a lot better than he did! We joke a lot about who had the better accommodations.”

Jenn’s husband was unable to attend the fishing trip, so she asked Darren. He had never fished for trout and was excited to give it a try. They looked forward to spending quality time together and catching up.

Darren arrived at Jenn’s house on Sunday afternoon, and then they drove to Ripon, WI, where they spent the night. Early the following morning, they arrived at Green Lake. They went for a two-mile ride across the ice sitting in a trailer pulled behind a 4-wheeler. When they arrived, they found Jason Zillmer of Badger Outdoors Guide Service had drilled around 20-30 holes through ice 10″-16″ thick, with 90-180 ft. of water under the ice. He had already set up three shacks with heaters and the other two set up by Darrell Kauth and John Brundidge of United Special Sportsman Alliance. 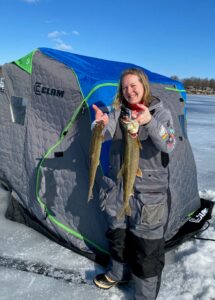 Jenn said, “It was so nice that all we had to do was show up with some warm clothes. I am used to packing our fishing gear and food and shacks etc.” Darren added, “This trip was a lot different because everything was ready for me to fish. I’m usually getting everything set up for my kids, and I don’t get a whole lot of stick time.”

Jason explained the jigging technique to them. “Very aggressive jigging with as much movement as possible,” he said. They were jigging with Rapala Jigging Raps and Northland Tungsten Sliver spoons, and their tip-ups baited with cut bait. Their lines were in the water at 6:30 am, and Darren caught the first fish by 8:00 am. “Trout fishing is way different than fishing for sunfish or walleyes,” he pointed out. “They are more aggressive fish than what I’m used to catching.” Jenn caught her first trout around 9:30 am and then missed two after that.

Jenn expressed, “My favorite part of the fishing trip was catching up with my brother. One of my other brothers, who are still active in the Navy, lost his 6-year-old son recently due to a health issue, and it has just been very tough for all of us. So it was nice to remember Lucas and talk and laugh about the wonderful little guy!”

Their guide Jason, added, “I always find it enjoyable fishing with veterans. Giving back to them is something I strive to do. They were all very grateful for the experience. It’s a style of fishing that is very limited in the Midwest, and I enjoy sharing it with other people.”

Congratulations to Jenn and Darren for enjoying the peace of fishing while sharing precious family memories of those who are with them and those who are in Heaven! God bless!