From Backpack to Barbary sheep!

When Kaden was a toddler, his father, Chris, would carry him around in a backpack while hunting, which imprinted his passion for the sport at a very young age. 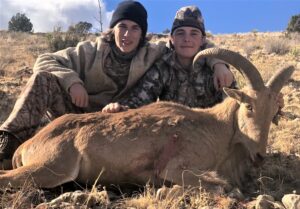 Now 15, Kaden was thrilled when his Dad told him he had a Barbary sheep hunt lined up and their friend Derek would help guide. Having never hunted sheep, his father, Chris, contacted two experienced sheep guides to get their input about where to go and hunt. Both guides recommended the same location.

It was around 6:00 a.m. and foggy when they parked in the bottom of a canyon near Mayhill, NM. They got out of the truck, packed their backpacks, lunch, and hunting equipment, then started walking cautiously up the mountain. Chris said, “It was very rocky and about ½ mile high to the top!” Reaching the top of the mountain ridge Kaden, Chris, and Derek saw great expanses of prime barbary sheep habitat full of shell rock, boulders, native grasses, and a series of other mountain ridges with canyons in between them. They proceeded to walk the ridgelines glassing the area around them, looking for a sheep to stalk.

As they passed a water tank, signs of many sheep in the area were evident, and their excitement grew! Continuing on for about another ¼ mile, they stopped to glass another mountain that lay across from them, with a deep rocky canyon in-between. After about 15 minutes, Chris finally spotted some sheep and exclaimed, “There they are!” Setting up his spotting scope, Chris looked down into the canyon and saw four rams heading up toward the opposite ridge. He then suggested they wait until the next day because they could walk straight up from where they parked their truck. 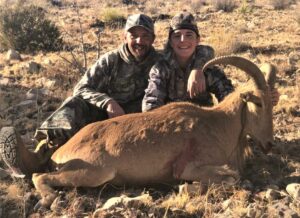 Kaden said, “we are here to hunt and get one of these sheep, and it’s still early so let’s go!” The guys tried explaining to Kayden the work it would involve going down one canyon and up the other side, but he said, “We are here to go after him, so let’s get going!”

Chris said, “All right, guys, let’s do it!” Roughly an hour later, the hunters were on the mountain where they had seen the sheep. It didn’t take long when many Barbary sheep were spotted, which included four very nice rams.

Kaden said, “We quickly sat behind the brush and judged their distance with our rangefinder. I was very excited and missed my first couple shots, and then they all started running and scrambling out of sight.”

It was around 3:00 p.m., and they were a long way from the truck, so they decided to start heading back before it got dark. They walked down the ridge into a canyon and followed an old rancher’s road that would take them not far from their destination. To their amazement, the guys spotted two big mule deer bucks in the distance as they continued their walk back.

“All of a sudden, the brush around us erupted with all sorts of commotion,” Chris said. “We looked, and sheep were jumping from the ground to a rocky cliff at least 10 feet high”. These sheep are incredibly agile and often make difficult targets to hit. 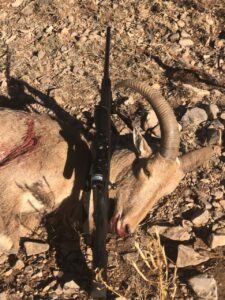 Kaden sat down and got ready for a possible shot.  He said, “I had bipods on my 77mm-08 Savage, and I set the legs down. I got a nice sheep in my scope, put the crosshairs on it, and made a clean shot at about 100 yards. It just jumped up like the rest of them and ran 30 yards and dropped. I was stoked; it was like the adrenaline was rushing like Buck Fever! I was sitting there shaking; it just happened so quickly it was incredible. My sheep was the biggest one in the group, with 19 1/8 and 18 5/8 horns.”

“My favorite part of my hunt was walking up and around that ridge; it was beautiful scenery and wildlife,” Kaden said. “You can look as far as you can see, and the mountains were gorgeous.”

Congratulations to Kaden on his trophy Barbary sheep and the fantastic memories he shared with his Dad and friend Derek! God bless!