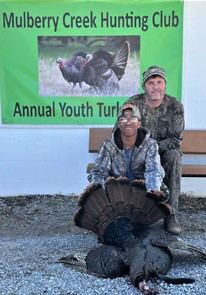 A five-hour drive with 13-year-old Jeremiah and 11-year-old Joshua was “filled with anticipation,” said their mother Jessica. Upon arrival at Mulberry Creek hunting Club in Jones, AL., the family settled in and then hit the target range to fine-tune their abilities using a shotgun for their first-time turkey hunting.

The following morning before sunrise, the special hunters and their mentors headed quietly out to their blinds. Although Alabama does not allow the use of decoys and tail fans for the first ten days of the season, the hunters and guides felt up to the challenge.

As they stealthily approached the field, they heard many geese flying overhead, and Joe spotted a nice gobbler already out in the field. Joshua and Joe sneaked in the blind and quickly got ready to hunt. They soon spotted two jakes out in the field on their left that were continuously gobbling. Then, suddenly, the jakes took off, running back across the field.

Joshua said, “The turkeys were following each other around like they knew something was out there. Then out comes this big turkey out of nowhere. Then suddenly, he was over by the other turkeys following them around, and then the two jakes were beating up on him. It was really exciting!”

When the three turkeys had finished fighting, Joe used his turkey call, and the big gobbler headed directly toward them. The turkey started strutting and gobbling quite a way out in front of the blind! “Unfortunately, it didn’t get close enough for a clean shot, but Joshua had a good time, which was the main thing,” said Joe. “I had a chance to shoot a jake, but I wanted the bigger one because I thought it would be more food for our family,” added Joshua. 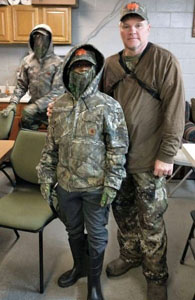 Meanwhile, Jeremiah and his mentor Patrick Cross also entered their blind. About an hour later, they saw a flock of hens. Jeremiah said, “We thought we saw a jake too, but it was a bearded hen. We didn’t know there was a gobbler in with the six hens because there was a tree in the way, and we couldn’t see it. So it was just a waiting game there!”

“Mr. Patrick began his turkey calls, first the hen call, then a gobbler call, and suddenly gobbler came running down to see if it was a hen. Mr. Patrick tried to get the turkey to stop moving, but it would not stop! Once I saw the tom, I waited for it to get closer. He asked me if I was ready to shoot it, and I told him not yet; then, I finely got him in my sight and took the safety off. I had made a perfect shot! Then, Mr. Patrick said, ‘go get your turkey and step on it to make sure it’s dead.’ While walking out, my hands were cold, but I was very excited!” 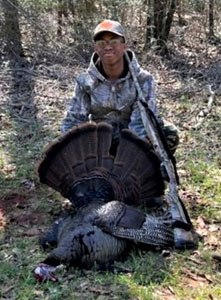 Patrick said, “it was a fun, action-packed morning in the woods. I came close to getting this bird twice last year and couldn’t get him. But we fooled him this morning, and our mountain man Jeremiah Johnson bagged this outstanding double bearded, 11.5″ and 8.5″, 23.10 lbs., gobbler with 1 1/4″ and 1 3/16″ spurs! I couldn’t be happier for the young man.”

Jessica added, “It was nice to see everyone so happy; watching the kids target practicing and making new friends. They were all beyond accommodating.”

Thanks to Mulberry Creek Hunting Club for their continued support in making hunts possible for USSA kids. Also, Patrick Cross and Joe Davis for donating their time and sharing their passion for turkey hunting with Joshua and Jeremiah. Congratulations to Jeremiah on his first tom! God bless!