“God helped steady my rifle for me when it mattered most!”

Donnie was a veteran and, before retirement, the Chief of Police with 35 years in law enforcement. Unfortunately, in 2018 he was diagnosed with ALS, and the opportunity to bag a bear seemed inconceivable.

“I was honored when my uncle Donnie asked me to go on his bear hunt,” said Wes. “When we arrived, Steve Jacob gave us a tour of his property, and then Donnie and I got into the blind while he freshened up the bait.”

They sat in the blind for almost five hours, but the temperature was in the lows ’80s, and they did not see any bear. So they went home and returned the following weekend on Sunday afternoon with cooler weather. Steve constructed a blind underneath one of his tower blinds located a little further back in the woods. He rebaited and drove away after getting the guys settled in, hoping luck would be on their side.

“As time passed on, I could tell Donnie was getting sore from sitting, and he was moving around a lot; in fact, we both were getting a little sore from sitting. Finally, Donnie couldn’t sit much longer, so he stood up for a little bit and then sat back down, and within a few minutes, Donnie saw the bears come in first, and they meandered right down to the bait.”
Donnie said, “The bigger bear was behind, the smaller bear, and I thought, oh boy, I’m a little shaky, but I will try it.” 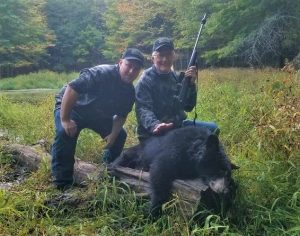 “Donnie had a gun rest with a shooting stick, but he didn’t want to use them. There was no stopping him from waiting for another bear to come in. He was dead set on shooting one of the two bears. He freehanded it and made a great shot, and the bear made a little loop and went down in the swamp about 20-30 yards from where he originally shot.”

“It’s a bonus to be able to go on a hunt like that and get a bear too. I believe God helped steady my rifle for me when it mattered most.”

We are grateful to Tom Grassley for donating his bear license and Mr. & Mrs. Steve Jacob for donating the hunt. Also, shout out to Michelle Pederson for her role in making this wish possible. Congratulations to Donnie on his trophy bear, and thank you for your service in defending our nation’s freedom and protecting your community for over three and a half decades! God bless!