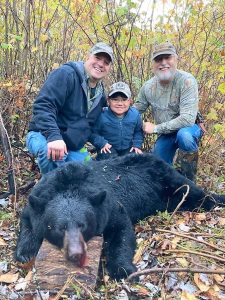 Ten-year-old Tyler had never been hunting and was thrilled when his parents told him about his upcoming bear hunt in Wisconsin. His dad, Chris, took him out to the gun range several times to familiarize him with accurate shooting. Their guide, Bruce Watruba, was sending them trail cam pictures daily, and after seeing the bear pictures, Tyler was getting more excited about his hunt.

The first day, Tyler, Chris, and Bruce entered the wooden blind with windows overlooking the bait early in the morning. Two days passed, but they never saw a bear, so they decided to hunt with dogs on the third morning.

“Watching the dogs work on a GPS unit was an incredible experience for my son. The start dogs got on a bear and tracked it for miles! The hunters positioned themselves in the direction the dogs were headed and listened to the dogs trailing for a long time; it seemed forever. We covered many miles just driving along, watching the GPS, and listening to the dogs run the bear. The dogs finally treed the bear, and we walked up to it, and his excitement was just through the roof.”
Tyler said, “I saw the bear up a tree, but it was too small! But I was very excited anyway because I had never seen a bear. And, it was so much fun hunting with dogs and just driving around and learning about the GPS.”

They hunted over bait later that evening and the following morning but didn’t see anything, so they headed home. Bruce continued monitoring the bait and, the next two nights, saw a bear on the trail cam, so Tyler and his dad returned the following weekend. Friday evening, they sat on bait, but it rained quite a bit, and they did not see anything. So, the next day, they decided to run dogs.

Chris and Tyler got up around 4:30 a.m. and met up with Bruce, John, and their bear hunting crew. They went out and checked the bait and trail cams and saw the most recent bear picture was good sized. When it was first light, they cut the start dogs loose, and they trailed around for a while, working to line it out.

Chris said, “We were just sitting there parked, and all of a sudden, we saw the bear the dogs were tracking run across the road in front of us. We all yelled out at the same time, “there’s the bear!” So, they gathered the start dogs up, met up with us, and then let them go with other fast bear dogs. It wasn’t long afterward the dogs treed the bear about 150 yards in, and we were all excited!” 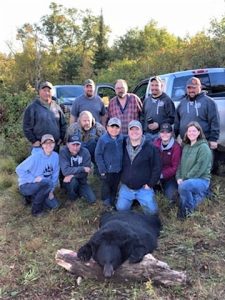 Tyler walked for a bit, then Chris and Bruce took turns carrying him in as they walked through all of the saplings 8 to 10 feet tall and then all of a sudden, they hit a little clearing on top of the hill, and they could see the bear about 70-80 yards away in the only tall tree just over the sunrise. Chris said, “I was holding Tyler when he first saw the bear but couldn’t tell how big it was.”

Upon arrival at the tree, they picked out the best spot, set up the tripod, mounted his great grandpa’s 30-06 Winchester rifle. After getting the gun stabilized, Tyler squeezed the trigger, and the bear fell out of the tree.

“When I was getting ready to take the shot, I couldn’t believe that I was going to get the bear, and my heart was beating like crazy, and I was super excited.”

“He just let out his excitement in pure joy. He was like the happiest kid, and I was the happiest dad. It was probably the best thing that ever happened to him.”

“The bear hunters gave me high fives, and dad hugged me and was super proud of me. Then they took some pictures, actually, a lot of pictures, then I called mom to show her the bear on FaceTime, and she was proud of me too!”

Much gratitude to Lisa Bohn for donating her license and Brue, John, and the bear crew for helping make a young man’s first hunt a great success. Congratulations, Tyler, on his trophy bear and the fantastic memories shared with Dad and his newfound friends! God bless!