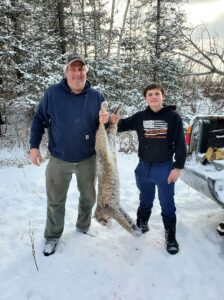 In 2016, Tim Thompson donated his Wisconsin bear license to a United Special Sportsman Alliance (USSA) recipient. The young man was battling a life-threatening illness and bagged a nice bear. The camaraderie and success of his hunt left unforgettable memories in the hearts of everyone involved!

Four years later, Tim drew a late-season north zone bobcat permit but could not hunt, so he contacted USSA, and his license transferred to 14-year-old Jason.

Jason spent the night before the hunt with Brent Kadubek and his son Derrick. As they talked over their plans, they got their gear ready for an early start the following morning.

They met up with their guide Jason Welch, Brian and Kayden Taylor, and Terry Kuester around 4:30 a.m. It was 10 degrees, and the snow let up around 7:00 a.m., leaving 3″ freshly fallen snow covering the tracks. They let their plott hound, Ruby, out of the box and waited as she sorted out the old cold track. As she moved along the trail, the scent got progressively warmer, and in time they had the bobcat jumped and on the run! 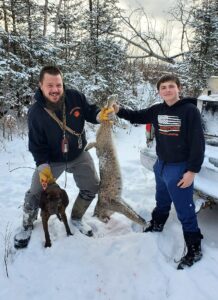 The guys drove over ten miles in their trucks while Ruby covered 2 ½ miles on the ground through the hilly and wooded swamp and hardwoods. They tracked Ruby’s progress with her Garmin tracking collar, and when they knew the dog had it bayed, they walked in 3/4 mile to the sound of their dog Ruby. In all, Jason saw the cat three times in less than 10 minutes before getting a clear shot with a 12-gauge shotgun, and with a squeeze of the trigger, the predator became the prey!!

“The best part of the hunt was Jason’s reaction when he saw the cat and Ruby right tight on its tail. When hounds men come together for a common cause, good things happen,” Brent said. “It was true teamwork and a group effort. It’s all about those hard-earned trophy smiles!!”

Congratulations to Jason on getting his bobcat and a bunch of hunting buddies too! Many thanks to Tim for donating another license and Wildside Outfitter for making a special hunter’s dream come true. God bless!