Hunting out of a grain wagon by 12-year-old Justin 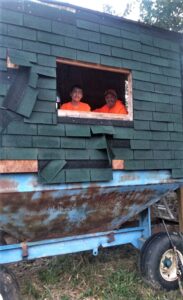 “I target practice on Friday, and my shots were bang-bang-bang right on the bullseye! Early in the morning, my mom and guide Rick and I were in the blind and did not see deer, so we moved to another blind, a grain wagon, but before we could get situated, the deer saw us and ran off. The next morning on my way to the blind, I decided if I saw a deer, I would take it. We went out to the same blind and sat there for a while. My mom was looking on an angle through the window and saw three deer walking down a trail. Then I saw them and told my guide. The gun was already on the tripod, so we waited until they got into my range. When they got closer, the deer were still far out, so I had to readjust the gun. I was shaking, and my mom and Rick calmed me down a little bit. I was trying to keep myself steady.” 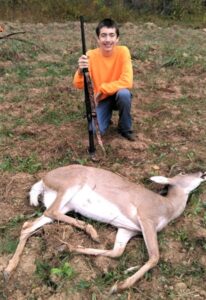 “Justin’s excitement level was high,” said Rick, and I told him, “keep the gun on her; we need a clear shot; he replied I have a clear shot!”

“I shot the deer through the tree branches, and it turned and dropped right there. Rick said it was the fastest he saw a deer drop from a gut-shot.”

“Yes, the deer dropped like a stone,” said Rick.

“Rick was a nice guy and veteran too. I collect army stuff, and he let me have his hat and some service clothes too. I will add it to my collection and someday have a museum,” said Justin.

Congratulations to Justin on his nice deer and fantastic memories shared with his Mom and Rick. God bless!