Taylor, Kaleb, and Austin had never been on a hunting trip and were ecstatic to learn they would be attending the 10th annual Pine Hills & Oak Hollars Child Classic event in Hamilton, AL. The boys arrived early Thursday afternoon and were pleasantly surprised to receive their hunting jackets, clothes, boots, and accessories.

Austin said, “after we got settled into our lodge, we went skeet shooting. It was my first time shooting a shotgun, and I did okay and shot a clay pigeon!” “We got to target shoot with deer rifles too,” said Taylor.

The boys headed out to go squirrel hunting with their mentors and their squirrel dogs early Friday morning. Dogs have been used to help hunters find game since humans first domesticated them, and they were ready to find those ‘nimble tree top rodents’ for the kids.

“It was my first-time squirrel hunting, and it was so much fun,” Taylor said, “and I shot it out of the tall tree.”

Jeff Carter said, “We got eight squirrels this morning, the dogs did a great job, and most importantly, all 3 of these youngsters got squirrels!” 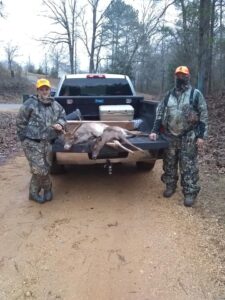 Early that afternoon, the boys headed out to their deer stands. As time ticked on, they were waiting patiently in hopes a deer would come out. Kaleb was first to site a deer “the 9-pointer came out directly in front of me. My heart was beating fast, and I was shaking too. I shot, and the buck fell right down! It wasn’t long afterward I got a doe too.” Around 5:00 pm, three does walk into the clearing by Austin; and he was able to bag his first deer as well.

Saturday morning, all the boys went rabbit hunting for the first time. They were thrilled to watch and listen as the beagles, who chased the rabbits in large circles as they brought them back past the kids. Jeff said, “We had a great morning of rabbits hunting. We only got two and missed a couple, but the boys had a blast!!”

That afternoon they all headed back out to their deer stands. The deer were moving well, and everyone got a shot at a deer. But as sometimes happens in hunting, some deer get away clean. Only Austin was able to connect and said, “I shot the doe close to the shoulder, and it started running into the woods, but it didn’t go far. I was pretty excited getting my second deer.”

Afterward, Jeff said, “It’s pretty cool to be a part of this Organization, and what a privilege to see these young men smile!! Guiding these kids really puts a smile on my heart as well! Thanks to everyone for helping us pull off this hunt, and I am already looking forward to next year.”

Many thanks to Jeff Carter, Pine Hills & Oak Hollers Childs Classic, mentors, volunteers, landowners, Maywood Christian Camp, and Sorghum Hollow Deer Processing. Congratulations to the young men on their successful hunts and the camaraderie and fellowship with their mentors. God bless!