It was a long time coming! 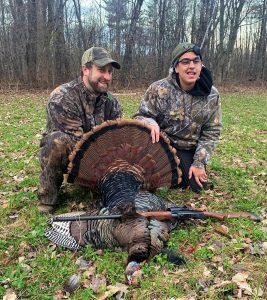 On the first day of Brandon’s hunt, his brother, Justin, and mentor Zach sat patiently while moving from blind to blind throughout the long day. They saw a few hens and Jake’s, but Brandon’s heart set on getting a big tom. “This was our third year trying, and I couldn’t have said any more prayers for Brandon to get a turkey,” Zach said.

Upon their return that evening, his friend Adam said he saw many turkeys on his property and recommended they be there early the following morning. Later that evening, around 9:00 pm, Zach went over and set up the blind. He was hoping they would see birds because it would be the last day of the hunt.

It was a beautiful Sunday morning, chilly but quiet and crisp. While quietly sitting, they heard gobbling in the dark from the roost and different Toms gobbling all around them!

A big tom came out on the field edge, about 100 yards away, and they watch him slowly take his time strut in gobbling as Zach practiced his skill at calling. The gobbler got closer and closer, and then he stopped 20 yards in front of their blind. Zach whispered, “If he sticks his head out, you can shoot.”

Brandon whispered with his gun on the shouting sticks, “I have to take my gloves off.” After he quietly slid them them off, Brandon reset his gun. Then he whispered again, “where are my ear muffs?” Realizing they were in the backpack outside the blind, Zack said, “We can’t get them; I will cover your ears with my hands so you can shoot.” 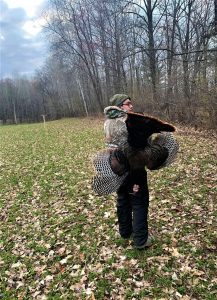 Before Zach could get his hands over Brandon’s ears, the telltale roar of the Remington 20 gauge filled the blind, and at 6:19, the gobbler was down! Everyone was ecstatic, and his brother Justin said, “Nice shot, buddy,” while Zach added, “that a boy, great job – you got him!”
“Brandon carried his tom over 250 yards back to the truck. He was very excited, maybe almost as excited as I was,” Zach said. “It was a long time coming!” Brandon’s tom weighed 21.5 lbs., had ¾” spur, and an 8 ½ inch beard.

“I was relieved, and super excited my son got his turkey,” Rose said. “He enjoyed the hunt and time spent with Zach and Justin. Brandon felt like he was one of the guys; he felt accepted.”

Many thanks to Zach Newton for giving Brandon and his brother an unforgettable hunt while listening to his grandfather’s words of wisdom, ‘If you can help, you should!’

Congratulations to the young man on getting a nice tom while following the ‘four Ps of turkey hunting; pattern your gun, practice, patience, and perseverance! God bless!