It was a team effort by all landing that fish!! 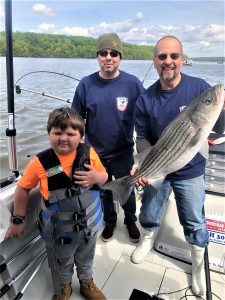 Chase and his mom, Liz, met up with fishermen Paul Zabinski and Tom Zabinski at the 340 Abeel Marina in Kingston, NY. It was a chilly Sunday morning with sunny blue skies and a temperature of 40 degrees. After they fitted Chase for a life jacket, they headed out to the boat. Paul told Chase and Liz, “We can’t guarantee you will catch something, but we can guarantee we are going to have a good time.”

Chase was quiet as he looked around the marina while taking in the beauty of the surroundings and wondering what would happen during his fishing trip. They all got into the boat and slowly made their way at 5 mph down the Rondout Creek for about two miles. Chase pointed out old ships in the water while playing with his new backpack filled with toys.

Stripers are anadromous, like salmon, and naturally spend their adult lives in saltwater and spawn in freshwater, and it was in the freshwater of the Hudson, they set their downriggers out. In time, the line popped off the downrigger, and the excitement began. Paul grabbed the rod and handed the rod to Chase. Tom assisted and instructed Chase in the proper way of reeling in the fish. The fish was powerful, and Tom helped hold on to the rod while Chase was cranking away.

Meanwhile, Paul was clearing other rods out of the way to prevent tangles and getting the net ready. As the fight when on, Chase got tired and was beginning to have trouble reeling. Tom told him to stay next to him, and he would help him reel it in. Another ten minutes or so passed, and they finally got the massive fish into the boat.

Chase and his mother could not believe the size of the magnificent striped bass. Chase said, “Mommy, I caught that fish, and it’s bigger than me.” It was 42″ long and weighed approximately 29 lbs. Liz said, “My son’s smile was the biggest I have seen in a long time. My heart melted.” Paul added, “I thought it was a sheer joy; sheer emotions!”

Striped bass larger than 28″ in New York had to be released, so they quickly took pictures and put him back into the water, and the fish swam under the boat and backed out into the depths of the Hudson.

“Knowing what Chase has been through and seeing how happy a kid he is inspirational. To put a smile on a kid’s face who had a rough go of it is a feeling that will never go away for my brother and me!”

“This trip meant more to Chase and me than one could ever imagine. We have never just had a Mother’s Day by ourselves, and this one was special. I have seen my son go through so much heartache, and this was nice to see him laughing and smiling. And for that, we are so thankful.”

We want to express our gratitude to Paul and Tom for giving Chase and his mom a fantastic fishing trip. Special thanks to Matt Pigliavento for his hard work and dedication in organizing this event, Best Western Plus in Kingston, 340 Abeel Marina, and USSA’s NY Chapter. God bless!