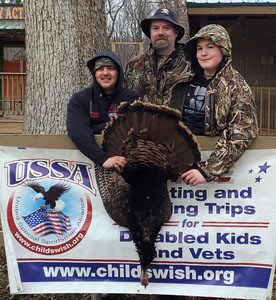 Friday afternoon, five USSA kids and their parents from out of state arrived at the Camp Lowden, BSA, located along the Rock River near Oregon, IL. ‘The Camp is situated on 250 acres of wooded property surrounded by the Lowden-Miller State Forest.’

The young hunters were filled with excitement about the chance to take home an elusive gobbler. After they arrived, they went to the local hardware store and picked up their hunting licenses. Then they headed back to target practice at the Boy Scout’s gun range. Each child and their mentor took their turn in blinds identical to what they would use during their hunt. They used Caldwell Shooting rests to hold their gun front and back while pointing it directly out of the blind. The blind chairs adjust up and down to make the kids the right height for an accurate shot.

Terry Day said, “We put targets outside about twenty yards. Their mentors work with them until they hit the target well. Again, consistency inside the blind is crucial, with the same type of chair and the same style of shooting rest they have used while practicing. The Caldwell shooting rest is incredible. These steps are the most significant safety thing we have ever done.” 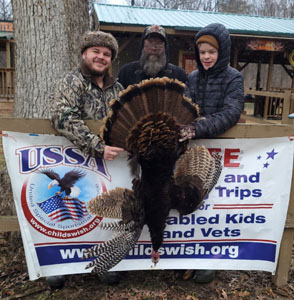 Around 4:30 the following morning, Hunter’s mentor Dakota assured Terry Day, “We will be back with our bird before breakfast!” Terry just chuckled as he knew that would be challenging. A little before 7:00 am, Terry texted Dakota, “You said you’d be back by 7:30 am for breakfast?”

It just so happened that while Dakota’s phone was vibrating with Terry’s message, Hunter was shooting his first turkey! So Dakota took a picture of Hunter with his gobbler, sent it to an amazed but elated Terry, and the guys headed back for breakfast!

Next to bag a turkey was Michael, who leveled his first big tom, while Elijah also took nice jake around 9:30 am. The hunt was over at 1 pm, so the families visited a local buffalo farm and learned the animals were used to help other Native American Tribes restock their population. Then they stopped and visited a deer breeder facility. 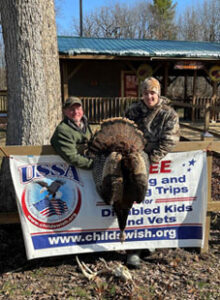 Later that evening, Hoyt’s mentor Donald went out and moved their hunting blind and scouted where the turkeys were roosting. Around 9 am the following day, they went back to where they saw the turkeys roosting, and Hoyt bagged a nice turkey. Meghan waited patiently in the blind with her mentor, but unfortunately, with a massive flock of hens, it was hard to call in a single gobbler. 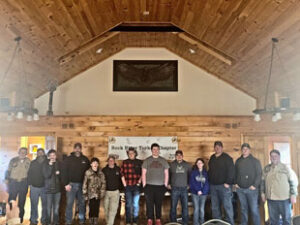 “Every kid who comes in with a bird and is full of excitement is impactful. Every bird that comes in is special to the kids, their mentors, and me. Even Meghan, who didn’t get a bird, and her positive attitude she gets to come back next year is a testament to her determination.”

Special thanks to the NWTF Rock River Turkey Chapter, mentors, volunteers, landowners, and Camp Lowden, BSA. Congratulations to the kids on getting their gobblers while making unforgettable memories with their mentors and parents. God bless!