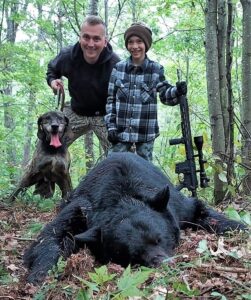 Early Wednesday morning, nine-year-old Wyatt and his dad, Tyler, met with their guides, Sam Redland and Mark Roth. It was a crisp morning with temperatures in the low 50s. The young hunter and his dad were excited yet curious about what would happen during the hunt.

Wyatt said, “We stopped and looked at several baits, and one of them had a hit, so we started letting the dogs out, and soon they were barking.”

They listened intently, tracked the dogs on the GPS, and trailed the bear over three miles before treeing it forty feet up in a tall red pine.

“I did not see the bear right away, and my dad said, “look up,” and I looked, and he was a huge one, and I was excited.”

After getting the gun on the shooting sticks, Wyatt got the bear in the crosshairs of his 6.5 Grendel rifle. His dad asked him if he was ready to shoot, and he responded, “yes!” Then he gently pulled the trigger and made a perfect shot.

“Then the bear went tumbling out of the tree, and I felt pretty good,” Wyatt said. 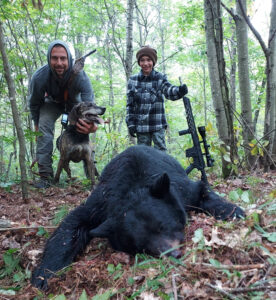 The young man was delighted and beamed at his accomplishment. He high-fived and thanked his guides, who, like his dad, was proud of him too.

Tyler expressed, “The best part of the hunt was seeing Wyatt’s smile from ear to ear after he shot his bear.”

Thanks to John Bohn for donating his bear license and Sam and Mark for their participation. Congratulations to Wyatt on his trophy bear and the wonderful memories he shared with his dad and hunting buddies! God bless!