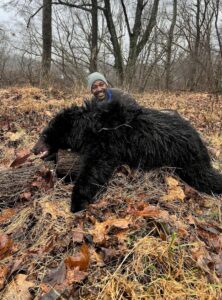 Marlinton is a small town in Pocahontas County in West Virginia, known for its scenic beauty and the community’s warm and generous hospitality. In addition, the state is known for the growth and expansion of the black bear population statewide, making the opportunity to hunt them more accessible.

Coy served six years in the Army until he was medically retired due to injuries sustained in Afghanistan. He said, “Once I heard of my bear hunt, I was incredibly excited, but I also had a bit of sadness in my heart. I wanted to call my dad and tell him about the hunt, but he passed away due to health complications last year.”

From his San Antonio, TX home, Coy spent the night in Nashville and finished his 23-hour drive the following evening. He met with the bear hunters and went over the hunt details for the next day. Unfortunately, they didn’t tree a bear on the first day but did run one in a cave.
The second morning the temperature was a bit warmer, but it still rained on and off, and they came up with a new hunt plan and how they would implement it. A bear was soon struck, and the chase was on.

Coy said, “Dave and I got our gear together and were ready to hit the woods, but the bear had a few escape tricks left! As we began to head into the woods, a group member radioed back that the bear had taken a turn. The bear and dogs ran down to the river bottom, and we watched them run up and downstream seemingly countless times!”

Finally, the dogs pushed the bear out of the river bottom and up the mountainside. Coy said, “Brandon took the lead, Chris, Dave, and I followed, forgetting that I’m too old for this stuff. As we crested the side, the bear took off again, and down the mountain, we went. The chase was on again, and the bear was running very fast with no sign of slowing down. The first clear shot I got, I missed high in front of the bear as the dogs were on its butt, literally.”

Then they chased it in the rain, trying to get the bear to tree for what seemed to be hours. Finally, the dogs ran ahead of the bear to cut it off and force the bear up the mountainside again. Once on top of the mountain, the bear climbed a tree. The guides raced up the slippery side to catch the dogs so Coy could take the shot. Arriving at the tree, he looked through his “trusty Salvage 270” scope and put the crosshair on the bear.

He said, “I took the shot and watched the as the bear was hit and tumbled out of the tree. I took a moment to take a breath and smile. Then I walked over to see where the bear landed while enjoying the beautiful view. While alone, I offered a prayer, thinking of my father, being grateful for the bear and the efforts of all of the guys that helped make this event possible.”

“The men and women I met were amazing; they cared for me as if we’d been lifelong friends. But then, there was a surreal moment when an introspective switch flipped, and I was at home. They have provided me with memories I’ll have for a lifetime.” 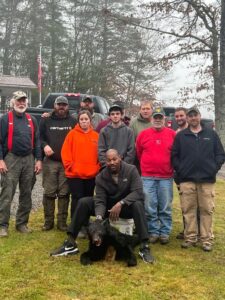 “If my Dad were here with us, the best part for him would have been hearing the excitement in my voice and seeing the excitement on my face. He would listen to my stories of hunting adventures with an intent look, like a child listening to story time with their parents.”

Thanks to the following for participating in the hunt; Tom Provezis, David Peacock, Justin Rhea, Justin Stintum, Chris Price, Brandon Hamons, Jason Sharp, Ray Sharp, Troy Sharp, Henry Armstrong, Clide Campbell, Reilly Stowers, and Gail Siers. Much gratitude to Appalachian Sport and Marlington Motor Inn for donating the lodging and all the USSA donors. Congratulations to Coy on his trophy bear and the beautiful memories shared with his newfound friends and his father in Heaven. Thank you for your service defending our nation’s freedom. God bless!

If you are interested in getting involved or know of a deserving youth or veteran, don’t hesitate to contact United Special Sportsman Alliance.