My heart was beating like a thoroughbred on a home stretch!

Gus, Garrett, and their dad enjoyed their ranch tour on that pleasant Friday afternoon, concluding with a session at the White Ghost rifle range. Proper fit and comfort are essential for accurate shooting, and the two brothers tried out several deer rifles until they found the ideal gun for them. Each boy could shoot well at 100 yards and were confident they could take the trophy buck of their dreams if the opportunity arose!

That evening, they drove to the hunting blind and got settled in. As the shadows began to lengthen, deer began to wander out of the mesquite, feeding. Their anticipation rose by the minute until a big dominant buck came into the field of view and ran the other deer off before a shot could be taken. They all headed back to the ranch for a delicious venison dinner!

Early the following morning, the hunters went to another ground blind in a different area. Many deer sited as the morning wound on, and another big buck came out into their field of view. Gus placed the .243 rifle on the ledge, waited until the deer was in range, and carefully took the shot. “My son was elated; it went right down and was the biggest deer he has ever saw,” said Ben, “152 B&C and weighed in about 175 lbs.!”

Later in the afternoon, they tried another blind hoping Garrett would get his chance. In time deer began to filter out into the field. Then the same dominant buck they saw the night before came out and started chasing the other deer as he had done before. Brent asked Garrett if he wanted to shoot the deer, and nodding his head, he replied yes! 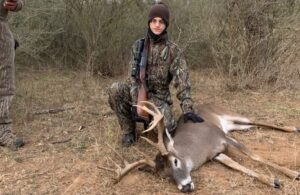 His mentor Bob said, “I got behind Garrett to walk him through it. He knew just what to do as he followed our directions. His hands were so small he had his middle finger on the trigger. My heart was beating like a thoroughbred on the home stretch. He had the gun up to his shoulder, and I said, when you are ready, take the shot. The deer turned, and he squeezed the trigger, and the 164 B&C buck weighing 203 lbs. dropped dead right there!”

Ben said, “The hunt was amazing to see my boys, especially Garrett handling a rifle. He weighs 55# soaking wet and the rifle was bigger than him, and getting his buck with one shot is impressive.”

Special thanks to Brent & Pam Geistweidt and White Ghost Ranch for giving Gus and Garrett a once in a lifetime hunt. Congratulations to the brothers on their trophy bucks and their outdoor memories shared with their new hunting buddies. God bless!