One dream becomes another! 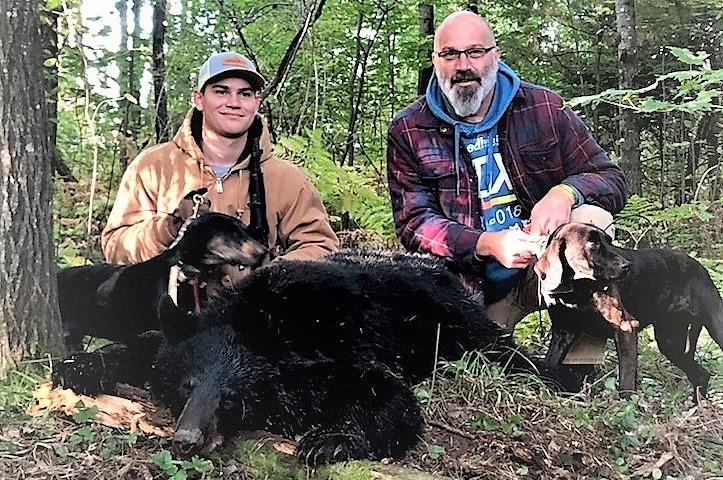 Freddy Lainger was ecstatic when he learned his name was in the drawing and obtained a Wisconsin bear license, a dream he longed for many years.

Shortly following the scheduling of his hunt, Freddy was diagnosed with a life-threatening illness. He decided it would be better to donate his bear license to a youth. Nathan, 15, was in remission and thrilled to learn he was the one chosen.

Early Saturday morning Nathan and his dad met up with their guide Sam. Finding a nice track on the second bait they checked, they turned the start dogs loose. It was not long after hearing the dogs barking off in the distance, they tracked the dogs on the GPS, and they trailed the bear 6 to 7 miles before they finally treed it. After a walk of over ¾ mile, they saw the bear in a tall tree. Nathan got the bear in the crossfires of his M1A SOCOM .308 rifle, pulled the trigger, and down it came. Everyone was ecstatic over the success of the hunt!

On the day following Nathan’s bear hunt, Freddy earned his Angel wings. Freddy’s son Dylan said, “My Dad had a passion for hunting and shared his knowledge with my brother and me at a young age. Giving his bear license to Nathan exemplified the great man he was!”

Many thanks to Freddy for donating the license and Sam Redalen for giving Nathan and his dad a once-in-a-lifetime hunt. Congratulations to Nathan on his trophy! God bless!