United Special Sportsman Alliance (USSA), in partnership with Adrenaline Ridge and private landowners, held its annual learn to hunt youth deer hunt in Bancroft, WI, on October 7th-9th. Most of the kids had attended a USSA firearm safety training and shooting proficiency event last summer, which piqued their interest in going hunting. 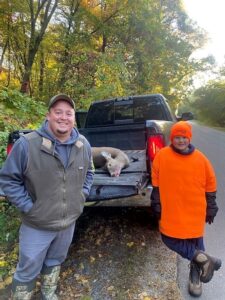 After dinner on Friday evening, they discussed what would take place throughout the weekend. The children received hats, t-shirts, and beautiful handmade blankets and then headed off to their cabin to get a good night’s sleep for their hunt to begin early the following morning.

Ten-year-old John, his mother, and mentor Scottie a.k.a. ‘Bald Eagle,’ entered the tower blind around half past five. After getting everything set up, Scottie familiarized John with the rifle by having him look through the scope and explain where to aim for a good shot if a deer presented itself. Then at daybreak, a nice doe entered the field and stopped with her tail facing them. It continued to graze, and at half past six, it turned broadside. Scottie asked John if he had the crosshairs on it, and he said yes, then the young man gently pulled the trigger, made a perfect shot through the heart, and the doe dropped in its tracks. John said with excitement, “Oh, my gosh… I got it!” Everyone, including the landowner, was amazed when they realized the young man shot the deer at 172 yards when they had the rifle sited in for 100 yards. 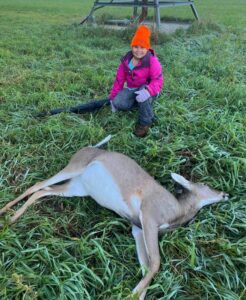 Nine-year-old Palin, her younger brother Nolan, and her father got settled in their tower blind with their mentor, Mike Lukas. They talked it over and decided they wanted Palin to get the first try at a deer and then her brother. Four does come out into the field to their left at daybreak, but they remain beyond shooting range. Then another doe came in around 125 yards, and her mentor reassured her it would be a good shot. Her dad said, “Palin lined up the crosshairs on the scope of the 7mm-08 caliber rifle and calmly waited for Mike to tell her to take the shot.” At 6:25 am, the gun went off, and Palin asked, “Did I get it?” Mike confirmed it, and with excitement, she added, “I got it, I got it!” Everyone was excited for her. She realized all the target practicing with her dad paid off! 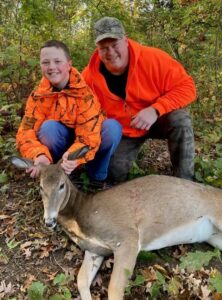 Fifteen-year-old Kade, his father Jesse, and mentor, Ken Smith, were sitting patiently observing the landscape when a deer came out in the field at about 100 yards. Unfortunately, it wouldn’t stop moving and made it impossible for Jesse to get a good shot before it trotted back into the woods. While waiting for it to return, two more deer came out farther away in a different field. So Ken and Jesse quickly got Kade set up to shoot out of another window. After the deer stopped moving at 135 yards, he got the deer in his sights, waited for a good shot, and pulled the trigger on the .243, the deer hunched up, took off running for about 40 yards, and then dropped. Ken asked him if he had hit it. Kade replied, “I think so.” That’s all he could say because he was so excited while smiling ear to ear. 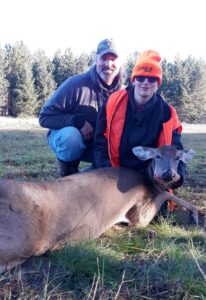 Fifteen-year-old Marvin, his dad, Shannon, and mentor Jake Wanicheck were in the stand early on Saturday morning. Being his first time hunting, Marvin was intrigued by watching the sunrise and seeing nature come to life from the deer stand. Then three deer came out into the field and began to graze. Marvin looked through the scope of the 7mm 08 rifle and zeroed in on the doe. “I shot the deer, and it jumped and ran into the woods.” They followed the blood trail and tracked the deer. Then Marvin said, “finding my deer was the best part of my hunt! I got to help field dress it too.” 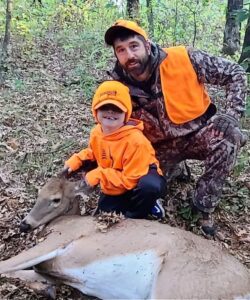 Amy said, “When the alarm went off at 4:45 am, Kaleb jumped out of bed and said, “let’s go hunting,” never seen my son get ready that fast; he was so excited.” Soon after, Kaleb, 9, his mom, and mentor, John Spearing, were inside the deer stand, hoping a deer would present itself. Then around 7 am, does come out to graze on both sides of their field stand. They patiently waited until the doe they wanted was in shooting range. Then Kaleb looked through the scope, put the crosshairs on the deer, and gently pulled the trigger, and the doe was down. John looked at Kaleb and said, “You got your first doe!” the young man was smiling from ear to ear and responded, “I really shot a deer?? Let’s go find it!!” His mother added, “The best part was seeing my son get a deer before me! I was so proud of him!” 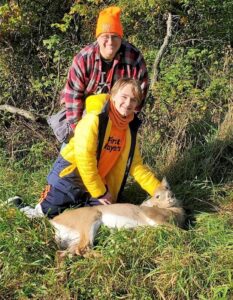 Thirteen-year-old Huntington, his dad, and mentor Eric Beggs saw many deer come out into the field but too far out of shooting range. Huntington said, “I was really excited, hoping to get a deer with antlers.” Then at 8:25 am, a nice doe they had been watching came into shooting range. “the gun was already pointing outside, and Eric helped line it up for me. I took the safety off and shot, and the deer ran into the woods.” Not long after that, his mentor tracked the deer and, when Eric returned to the blind, said, “Congratulations, you got it!” “The best part of the hunt was watching deer come out in the early morning. After that, the sun was up, and it was beautiful,” Huntington said. 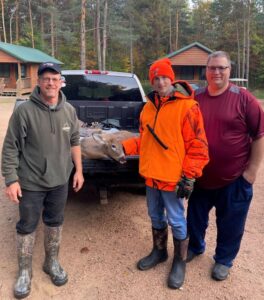 Although Aiden, 13, his father, Dave, and mentor Brian Cullen did not see any deer in the morning, they returned to their blind early afternoon, hoping one would come out of the hardwoods. “Aiden brought a deer grunt call along and was excited to use it out in the woods, as he’s been practicing a lot,” said his mom. Then shy of 4 pm, Aiden’s grunt call paid off when he spotted a young buck coming out of the woods and excitedly said, “deer!” Soon after, the young man made a perfect shot with the Savage 25 06 bolt action rifle, and his first deer dropped. Then excitedly and in a shocked tone said, “I got him!!” Everyone in the blind was thrilled for the young man! His mother added, “The best part of the hunt was seeing the excitement and surprise on Aiden’s face.” 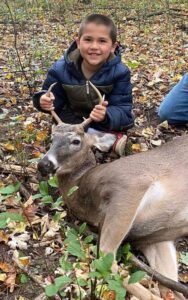 Seven-year-old Nolan was excited that his sister Palin had gotten a doe that morning and was hoping to get one too. Later in the afternoon, they saw seven bucks to their left in a field about 240 yards away. His dad Henry said, “They got as close as about 175 yards when another buck and doe came out next to the stand from behind us, we startled them, and they ran across the field into the woods.” They continued watching for them, and the buck returned to the field on their right at 125 yards. Nolan got the gun steady and lined up the crosshairs on the deer. His mentor, Mike, told him to pull the trigger, and the 5-point buck was down. Nolan asked, “Did I get it?” Mike confirmed he got the deer, and Nolan said, “I got it! Woohoo!”Henry added, “The best part of the hunt for me was watching Nolan and Palin get their first deer and seeing them excited to be part of this camp.” 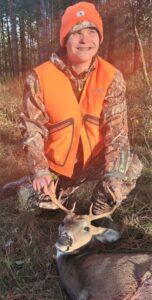 Fourteen-year-old Owain, his father, an Army veteran, and his mentor, Brad Rothermel, saw six nice bucks and eight does in the field earlier that morning. Owain was nervous and wanted to wait and see what would come out later that day. Brad said, “At this point, two more big bucks started fighting hard about 150 yards away, and now all the deer in front of us began to walk away.” They saw many deer that morning, so they returned to the same tower stand situated in a pine plantation later that afternoon. Luck was on the young man’s side as the 10-point buck they saw earlier came back out and stopped directly in front of them. Initially, Owain got buck fever, and after it settled down, he made a perfect shot with the .308 rifle and yelled out in excitement, “I got a buck!!” When they got out of the blind, Brad said, “we had him track the blood trail to find his deer, and when he saw it, he was so excited and kept saying I knew I made a good shot, and it wasn’t going far. His dad said, “The best part of the hunt was my son being able to enjoy being in the woods and listening intently to Brad’s mentorship and sitting quietly for over three hours.” 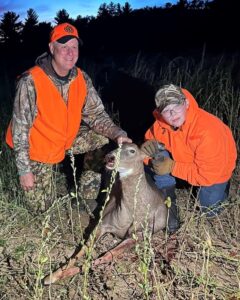 Ten-year-old David, his mother Joyel, and mentor Jeff Davis had been hunting earlier that day on a different piece of property and saw a few does but none in range for a good shot. Later that afternoon, they tried another blind, and within two hours, they saw six does and one buck off in the distance. Then, Joyel said, “When we were just about to pack up for the night, a big doe and two smaller ones came out. The big doe stopped to pee.” David lined up the crosshairs on the scope of the Ruger American 6.5 Creedmoorgor and gently pulled the trigger, then said, “I think I hit it!” Then the doe ran, so Jeff and David tracked the blood trail. Joyel said, “Then we heard David say across the field in the woods “Holy moly! I did it!” He was so excited and so proud. “The best part of the hunt was seeing my son get so excited about getting his deer and seeing the friendship he has with his mentor. Jeff and his wife have treated us like family and made David feel special.” 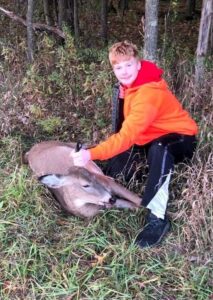 Austin, 15, and his mentor, Shayne Leach, arrived at their stand around 6:30 am on Sunday and were settled in shortly afterward. Shayne said, “The deer started moving almost instantly. Austin’s patience carried over from the previous day as he immediately reached for the binoculars and started glassing the field and evaluating the deer. Around 7:30 am, Austin was presented with a picture-perfect, broadside shot by a feeding doe. Then, repeating my instructions to himself, he said, “I breath out and squeeze the trigger,” to which he executed a textbook, perfectly placed, relaxed shot.” And he added, “When he finally found the first signs of blood, you would have thought we recovered the doe as he embraced me with a big old hug and said “we did it,” “I finally got my deer”!

“I have been participating in this youth hunt for the last five years. I wanted to be involved to give back to the kids that may not be as fortunate or have a place to go hunting. In addition, I enjoy teaching kids about the outdoors and how to provide food for their families. So many kids don’t get to spend time with Mother Nature; I believe it’s the best place to relax and unwind. Walking in the woods provides us with the sites, sounds & beauty that bring us peace in life,” said Jeff Davis, a USSA Board member.

Congratulations to all the USSA hunters on their 100% successful hunt with three bucks and eight does. We hope the fantastic memories you shared with your mentors and parents in the blind remain etched in your hearts forever. Thanks to Eric and Marilyn Beggs, Adrenaline Ridge, mentors, landowners, volunteers, and financial donors for their participation and dedication in making it an unforgettable experience in the great outdoors. God bless!

If you know of a deserving child or veteran who might want to attend a free hunting trip, don’t hesitate to contact United Special Sportsman Alliance.