Sunlight on a young man’s dream!

Drew, his dad Antonio, and guide Brad Rothermel got settled into their blind. Not long after, first light, a few small deer came out into the field. The wind changed directions, so later in the afternoon, they moved to a different spot, but the deer were out of shooting range. Brad decided to change tactics the following morning and went with the spot-and-stalk method. 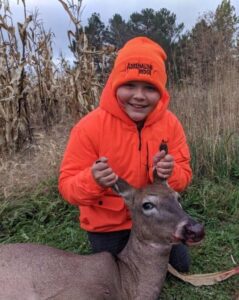 Drew said, “the deer was 200 yards away, so my guide told me we needed to move. I was excited and felt cold, but kept walking. I looked over, and there were two does, but there was a tree in the way. Then a doe moved, and there was sunlight reflecting right on the deer. I stopped shaking and made the shot.”

The guys searched for over an hour but could not find a blood trail and had to stop looking when they came into the tall grass. Following breakfast, Drew and his dad packed up and headed home. They were an hour away from the hunt location when they got a call from their guide with good news.

Drew said, “It was the most exciting part of my hunt getting Brad’s phone call saying he found my deer!”

Congratulations to Drew on the unforgettable memories shared with his dad & Brad. God bless!