Teamwork in The Timber 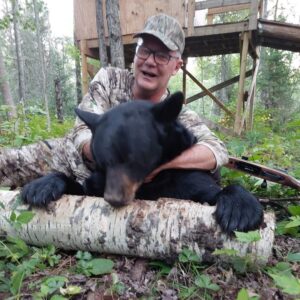 Howard served 20 years in the Army as an infantryman. He spent six years in Korea, three years at Ft. Campbell KY, 18 months at Ft. Bragg NC, four years at Ft. Benning GA, 30 months in Vicenza, Italy, and the remainder of his time until retirement in Chicago teaching ROTC. Including five months in Bosnia, three months in Albania, and several other peacekeeping missions.

Howard said, “When I learned about my bear hunt, it was exuberant. I felt like I had just won the lottery.”

In early August, Tom Huiras contacted Howard and went over the preparations for the hunt; they stayed in touch weekly with updates and what to expect. Then two weeks prior, Mike Baumann, his guide, contacted him and explained what to expect in the blind, if it was a good shot to take, and proper shot placement. His excitement continued to rise after receiving weekly pictures from the guys.

Tuesday evening after arriving, he followed Tom to his property on Lake Emily. There he met the hunting group who had been baiting and preparing to assist on the hunt. After a delicious supper with enough food to feed an army, the group sat around and talked for hours.

Early afternoon Howard and Mike entered the 8×8 permanent ground blind with small windows on all sides. It was situated 60 yards uphill from the bait. They saw a herd of deer pass by, and then about 30 minutes later, at 5:50 pm, the bear hit the wood line and meandered right down to the left side of the bait.

Howard said, “As soon as the bear showed itself, my heart rate went up, and adrenalin kicked in.”

The bear hung out for a few minutes while looking at the blind and sniffing to see if it was safe. Then, it moved behind the bait and came head-on toward the blind without a shot.

“She stood for what was about 5 minutes staring at us. We didn’t move to spook her. We also ensured she didn’t have any cubs with her because they had been seen on the camera a few times.”

The bear started moving the logs covering the bait, and as she began to feed, Howard gently set the 6.5 PRC Mossberg Patriot rifle on the arm of a rifle cradle, looked down the scope, got it in the crosshairs, and squeezed the trigger. Her front lifted slightly off the ground, and she tried to circle the bait, and then she was out of sight.

“I waited a few seconds, took a deep breath, and let out a few expressive words after knowing I got her. Joy, sorrow for her, and every emotion flooded through me. I could not stop smiling and feeling a sense of accomplishment.” They waited twenty minutes, then tracked it about 15 yards from the bait.

“When we went down to her, every emotion hit again. When everyone came to congratulate me and help recover the bear, it felt like I was MVP of the Super Bowl.” 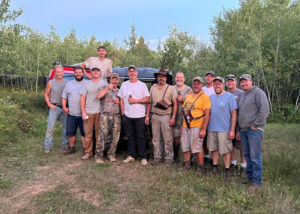 “I am thankful for everyone who participated; I made many new friends and told strangers my story for the 1st time ever. As a result, I think they understand a little more about my disabilities, and I hope my actions allowed them to be comfortable. There were a lot of stories told in the few days I was there, and this group genuinely made a big difference.”

“Even though I didn’t get to see the legendary Bigfoot riding the elk, maybe someday I will join them, see Bigfoot assist others in their hunt so they can have a feeling of accomplishment. It was a life-changing experience that let me know I can still do things I want with a little help from new friends.”

Shout out to the generous bear license donor and the Random Lake Rod & Gun Club for providing a fantastic hunt. Congratulations to Howard on his trophy bear, and thank you for your service in defending our nation’s freedom for two decades! God bless!

If you know of a deserving child or veteran who might want to attend a free hunting or fishing trip, please contact United Special Sportsman Alliance.