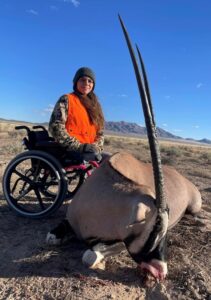 After their eight 1/2 hour road trip, Autumn 13 and her family arrived in Socorro, NM, and received a warm welcome from their guides, John Plowman and Rodney Plowman.

Autumn said, “When I learned about the Oryx hunt, I was excited yet nervous. I had only hunted deer with my Dad and Pops (grandpa). So on the drive here, I thought about how hard my hunt might be, but I was at ease after John told us what to expect.”

Early the following morning, Autumn went target practicing with her guides. First, she hit the 300 yards coyote silhouette, followed it up with a hit on the 350-yard gopher silhouette, and topped it off with a 500-yard buffalo silhouette hit. After that, everyone was confident that she was ready, and they headed out to the White Sands Missile Range.

The mobility-impaired card allowed Autumn to shoot from the vehicle, so they loaded her wheelchair into the back of the truck, and she sat between John and her dad Brandon, while Rodney drove and visually scouted for Oryx.

John Plowman said, “We were not in the field long when we saw six Oryx about 350 yards out. They were moving slowly, Autumn missed the one at the edge of the herd, and then they ran off. Being her first time seeing one of these amazing animals, she was over-excited and a bit nervous.”

They continued driving and spotted another herd of about twenty, but they were too far out of shooting range, and they soon ran off quickly. Later, they came upon a bull alone in the field at 425 yards. 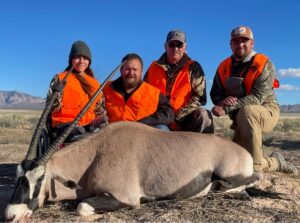 Autumn got herself into a comfortable position while John got the 6.5 SAUM rifle set up, pointing out the window and ensuring she could comfortably maneuver to get an accurate shot on the animal. Her father got behind her if she needed support for her back if the gun kicked. She looked through the scope, pulled the trigger, and made a perfect shot in the chest, and the bull ran off. They drove around on another road to the other side of the section and found him lying down. John gave it a second shot to be sure it was safe to approach the huge beast!

Brandon said, “When we realized how big it was and learned it was a trophy bull with 37-1/2″ horns, we were even more excited. Having the opportunity to have that memory with my daughter was incredible.”

“After I made the shot and we found the bull, I was so happy and couldn’t wait to take pictures with it,” Autumn said joyfully. 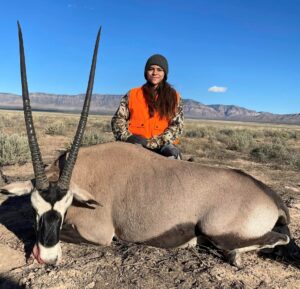 “An amazing shot, and an amazing hunt, was a recipe for lifelong and unforgettable memories. Congrats to Autumn on her Giant NM Bull Oryx,” exclaimed John Plowman, USSA NM Rep.

Special thanks to John, Rodney, and Jamie, who donated his Oryx license, the White Sands Missile Range, the New Mexico Department of Game and Fish, Rust Deer Plant, and USSA Donors for helping make a once-in-a-lifetime hunt come true. Congratulations to Autumn on her trophy oryx and the unforgettable memories she shared with her father and guides. God bless!

If you are interested in getting involved or know of a deserving youth, please don’t hesitate to contact United Special Sportsman Alliance.