“The Lord was behind this fishing trip”

Barren River Lake State Park is a true sportsman’s paradise surrounded by forests, rolling hills, and the Barren River Lake, which is filled with catfish, bluegills, and 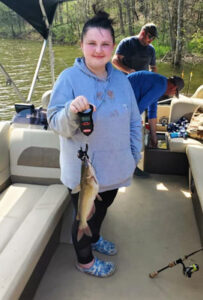 crappie. It is an ideal location for any family to stay for a weekend and enjoy inner peace and tranquility while setting aside their daily medical issues.

USSA’s Kentucky Representative Mark Dickson and his wife Amy knew firsthand what families endure and the comfort they experience in the wonders of our natural world. In 2010, they attended the ‘IL Dream Hunt’ in Sahara Woods with their 9-year-old son Spencer who has Cystic Fibrosis.

Mark said, “the part that impressed me the most out of the dream hunt was the camaraderie of the 12 kids outside throwing a football and having a good time. And for that moment, no child had health issues. Everyone forgot about their doctor’s visits and treatments, and they were having fun as kids would do, which really impacted me.” 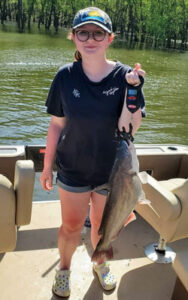 It wasn’t long after attending a few more USSA events and feeling the constant love among the people that, in 2015, Mark and his friend set up a fishing trip near his hometown of Glasgow.

“We were not sure this would be an annual event because we lacked sponsors and money, but we did have support from our family and friends and the Barren River Lake State Park. Then after the first year, people and businesses started making charitable donations, and local Churches provided meals and money. We trust in the Lord, and He provided what was needed to make it a yearly event.”

This April 21st, the USSA families arrived in Lucas, KY, and after getting settled into their cabins, they met up with their fishermen and the volunteer staff for dinner. The following morning could not have come soon enough as the families boarded the boats with enthusiasm and wonder. 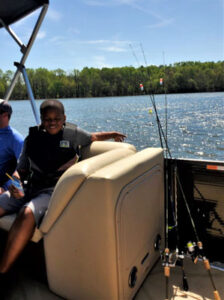 around in the boat with Donnie Franklin and me. He would hang over the edge of the pontoon and put his hand out over the lake.”

Eric Price and Cory Crane took three sisters and their mother Angie on their boat. First, Ana caught a nice bass, and then Laura reeled in an 8lb catfish, followed by Alexis 4lb catfish.

“After lunch, we changed tactics, and we tossed our casting nets, caught some live shad, and then started fishing. After that, we started catching bigger catfish. First, Angie caught a 17lbs 14oz catfish, “Holy cow she said in excitement. I never caught a fish that big!” Then her daughter Alexis got a nice 10 lbs catfish. The following morning Laura reeled in a nice 2 lb catfish, and her sister, Ana, got a 5 lb catfish.” 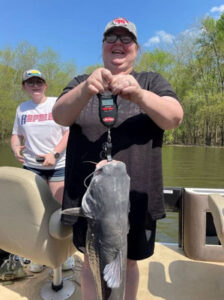 Later that evening, everyone gathered around the campfire and shared their fishing stories, and by the end of the night, everyone was laughing as the bonfire crackled.

Mark said, “We roasted hotdogs and cooked hamburgers. Nick, who was shy at first, was now talking and joking with everyone, and it was great. I bet he roasted 20 marshmallows; he was having a good time.”

Amy expressed, “I know the Lord was behind getting this fishing trip off the ground. I don’t think we could have the opportunities and relationships we have had these past six years with these families and make those connections if He was not involved. We see the happiness on both ends holding an event and attending the IL dream hunt years ago. Now I love being on this end where we can show the hospitality and show these families a good time and just love on them.”

“Spencer wants to continue being part of this fishing trip; he connects with them because he has been through many things they go 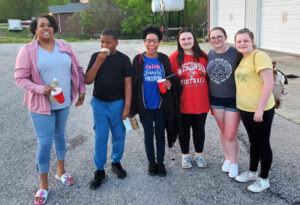 through. I want my son to see how big of an impact he can have on someone’s life, even for a couple of days with them. To show him the love for one another and to help one another. So many of these parents just want someone to listen to them, and if you tell them your story, it’s comforting knowing they are not the only ones going through some of these trials.”

Our gratitude to Mark and Amy Dickson, Eric and Jamie Price, Donnie and Megan Franklin, and Corey and Lori Crane for their role in making these families’ fishing trips unforgettable. Special thanks to Barren River Lake State Park and the USSA donors and sponsors’ continued financial support. Congratulations, kids, on your great catch! God bless!