The Turkey Dominator takes on a feathered orchestra! 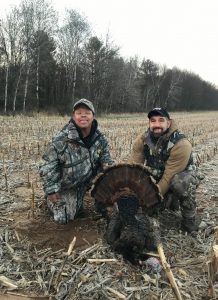 13-year-old Maurreon grew up in a family where hunting was a tradition. His grandfather, Todd, had been turkey hunting for over twenty-five years and waited patiently for an opportunity that would work for his grandson. Lawanda said, “My son has Down syndrome and enjoys watching hunting shows with Todd, and jumped at the chance of trying turkey hunting himself.”

Maurreon and Todd met up with their mentors John and Bryan at the hotel early Saturday morning. Their blind was a 1/2-mile hike in from where they parked, so Maurreon held his grandfather’s hand as they followed their mentors to the blind.

John and Bryan set up the decoys as the sun began to rise and then set the gun up for Maurreon. Soon afterward, “We heard turkeys coming our way, and we heard gobblers all over the place; it was like an orchestra,” Todd exclaimed. As the sunlight inched across the field, Maurreon sat still in awe listening to the bird’s gobble. They continued looking out the blind, and suddenly, they saw a couple of turkeys fly down from a nearby tree.

Todd said, “then instantaneously, we must have seen 15 birds fly down from trees next to us. We had some turkeys walking behind the blind, and we never made a call. Then two jakes start walking towards us. Maurreon reached back, tapped me on the leg and whispered, “Todd,” and pointed to where they were coming from, and then by that time, two jakes came in and were very close to each other. They kept winding in and out of each other, so we had to wait probably a minute or two for the birds to separate.”

John put a shell in the chamber and got the gun lined up. The jake was in range, so Brian told Maurreon to push the safety off and aim for the head. An instant later, the shotgun roared, and a nice jake was down!

“I think I was more excited than Maurreon,” said Todd. “I patted him on the shoulder and asked him, “Do you want to go out and see it?” He said, yeah!” We got out there, and he picked up the jake’s head and was very excited, and I said, “You did that!!” He was high-fiving everybody, and the smile on his face was just priceless. At that time, I knew he realized it wasn’t something he just did, but it was something he really liked and enjoyed. It opens doors for him on stuff he can do! I knew at that moment by the look on his face he had fun.”

After sending Lawanda a picture of the gobbler, the hunters headed back to clean the bird. John nicknamed Maurreon the ‘Turkey Dominator.’ Todd added, “It’s been a long time since I heard a concert in the morning. God has a way of working things out, and He meant for John and Bryan to mentor my grandson’s first hunt.

“He’s hooked now, and I am overjoyed for him! When we got home, he was excited telling his story to everyone and gave his sisters a feather.” Lawanda said. “I would tell other mothers don’t hold their child from great outdoor experiences like this hunt.”

Many thanks to John Spearing and Bryan Cullen for donating their time and sharing their hunting skills with the young man and his grandfather. Congratulations to the ‘Turkey Dominator’ for getting his first jake! God bless!